Ford is a leading name in the automobile market that added revolutionary streaks to car-making. Its very first innovation, the moving assembly line, added efficiency and sharpness to the whole deal of piecing together a vehicle. And now, the company has added artificial intelligence to its equation, anticipating better and more efficient solutions. 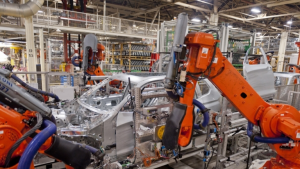 Robots already play a significant role in assembling the parts of the vehicle at a Ford Transmission Plant based in Livonia, and now with the addition of artificial intelligence that learns from the previous attempts, to arrive at better knowledge and efficiency, the company is all set to accelerate its success and growth further.

The robot arms work and assemble the pieces and operate within the confines of a large safety cage.

A startup called Symbio Robotics provides the technology used by Ford for this purpose. The technology analyses and detects the previous attempts to discern the best suitable one which will help in enhancing efficiency. The same technology is being used by Toyota and Nissan to enhance their production line efficiency.

The technology significantly adds a speed boost to the assembly line, allowing it to run at a faster pace. This is a great bonus in automotive manufacturing. Although artificial intelligence is viewed with inhibition and as a disruptive technology, the model at the Livonia torque setup indicates its slow penetration into the industrial processes.

Although robots are effective and accurate in carrying out the task assigned, they carry out a monotonous list of work and lack any capability to adapt or improvise according to surroundings. This is where artificial intelligence comes in, with the experts and researchers doing their best to incorporate more capabilities in the robots, allowing them to work with more efficiency and skill.

With the list of benefits, automation also comes with a longer list of challenges and roadblocks which must be dealt with prudently to achieve the target results. One of the major challenges is the unpredictability of machine learning methods and certain manufacturing processes that require specific and unique automation techniques. This is in addition to the wide array of cybersecurity implications that comes in the wake of the increased use of artificial intelligence. The lack of knowledge on the part of the workforce is another roadblock that has to be eliminated to ensures efficiency and productivity.