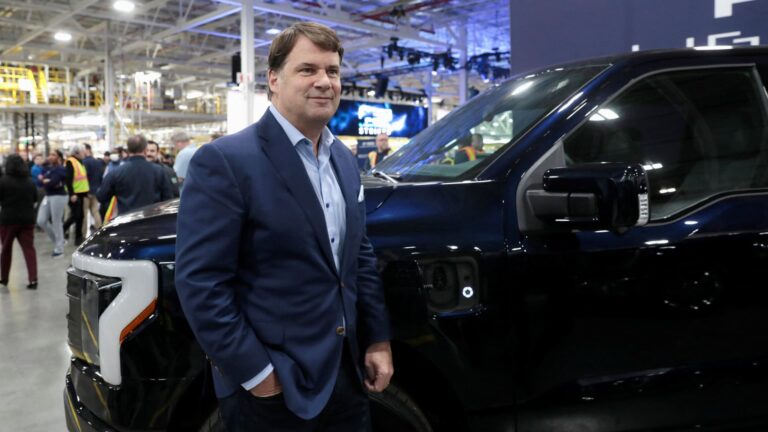 Ford convinces 65% of its dealers to get “EV certified”

Ford has offered its dealers with option to become “EV-Certified”. It will come under two programs with expected investments of $500,000 or $1.2 million. The dealers with higher tier will receive “elite” certification and be allocated more EVs. For the higher tier, they will have to pay upfront costs of $900,000.

Ford, unlike crosstown rival General Motors is allowing dealers to opt out of selling EVs and continue to sell the company’s cars. GM has offered buyouts to Buick and Cadillac dealers that don’t want to invest to sell EVs. Dealers who decided not to invest in EVs may do so when Ford reopens the certification process in 2027.

“We think that the EV adoption in the U.S. will take time, so we wanted to give dealers a chance to come back,” Farley said during an Automotive News conference. Ford’s plans to sell EVs have been a point of contention since the company split off its all-electric vehicle business earlier this year into a separate division known as Model e. Farley said the automaker and its dealers needed to lower costs, increase profits and deliver better, more consistent customer sales experiences. Farley on Monday also reiterated that a direct-sales model is estimated to be thousands of dollars cheaper for the automaker than the auto industry’s traditional franchised system.

According to Wall Street analysts, direct-to-consumer sales is a benefit to optimize profit. However, there have been growing pains for Tesla which uses the sales model, when it comes to servicing its vehicles. Ford’s current lineup of all-electric vehicles includes the Ford F-150 Lightning pickup, Mustang Mach-E crossover and e-Transit van. The automaker is expected to release a litany of other EVs globally under a plan to invest tens of billion of dollars in the technologies by 2026.

Around 65% of Ford Motor’s dealers have agreed to sell electric vehicles as the company invests billions to expand production and sales of the battery-powered cars and trucks, CEO Jim Farley said Monday. Also around 1,920 of Ford’s nearly 3,000 dealers in the U.S. agreed to sell EVs, according to Farley. He said roughly 80% of those dealers opted for the higher level of investment for EVs. It’s an effort to elevate Ford dealers as the company seeks to grow sales across its traditional and commercial businesses as well as EVs. Tesla and other electric vehicle startups sell directly to consumers without franchised dealers. In September the CEO said, “We’re betting on the dealers. We’re not going to go direct. But we need to specialize. The main message I have for the dealers, which I’ve never said before, because I didn’t believe it was true, is that you could be the most valuable franchise in our industry.”