Garry Kasparov says cryptocurrency will replace the dollar in 10 years

Chess grandmaster Garry Kasparov believes cryptocurrencies are the way of the future. Coindesk reported that he says, the cryptocurrency will replace the dollar in 10 years. Though some doubt it, Kasparov claims they offer inflation protection.

Cryptocurrency will replace the dollar in 10 years, says Garry Kasparov 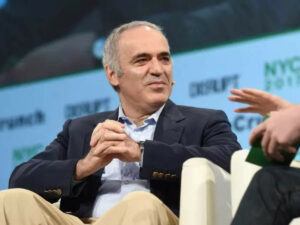 Garry Kasparov has predicted that cryptocurrencies will replace the dollar in ten years and has lauded digital assets as the future. Many consider Kasparov to be the greatest chess player of all time, and he told Coindesk on Monday that cryptocurrencies like Bitcoin are “digital gold” that can keep their value as inflation grows.

He said cryptocurrencies, in particular, are a fantastic weapon for individuals to fight back against what he regards as government overspending, which he claims is leading to high inflation and eroding asset values.

“Trillions of dollars will be printed in democratic countries in America and Europe,” he told the crypto news website. “I’m not satisfied that the government has unrestricted authority to utilize my taxes to depreciate [the dollar].”

“I’m not a financial expert, but I would not be surprised if, in 10 years’ time, the dollar will be replaced by the basket of coins as a standard.”

The idea of bitcoin and other cryptos as “digital gold” that can hold their value has gained traction in recent months, as investors seek assets that can insulate them from the highest US inflation since the 1980s.

Proponents argue that Bitcoin, like gold, is scarce – only 21 million coins can ever be “mined” – and hence has a better chance of holding its value than other assets.

However, other critics claim that bitcoin and other cryptocurrencies are simply too unpredictable to be trusted as safe havens for money. They cite the bitcoin “winter,” during which the price fell from approximately $20,000 in late 2017 to around $3,000 in early 2019.

Kasparov has long been a backer of crypto and bitcoin projects, despite being an opponent of Russian President Vladimir Putin. He got acquainted with cryptocurrencies through the Human Rights Foundation, which promotes them as a way for people to receive money without being controlled by the government, he told Coindesk.

Kasparov issued a series of non-fungible tokens in December, which are works of art or artefacts whose ownership is validated through cryptography. They include photographs of significant events in his life, such as the famous chess match in the 1990s versus IBM’s “Deep Blue” computer.