Microsoft Edge has seen an increase in bloatware over the past month or so. If you thought that was horrible, you won’t believe what you’re about to hear. Norton 360 installs a crypto-miner named Norton Crypto on users’ computers.

Are you confused as to how an antivirus company could use such nefarious tactics? Isn’t the product designed to prevent such possibly harmful apps from entering the machine? It’s all legal, and it’s all properly recorded. Here’s a FAQ page on Norton’s website that describes how Norton Crypto works, which was first disclosed last year. 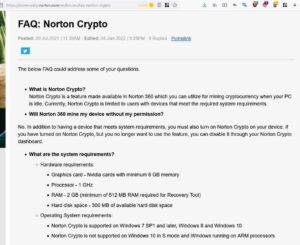 Norton Crypto is a “feature,” according to the cyber-security corporation, that uses your PC to mine Bitcoin when Norton 360 detects that the device is idle. Norton will be in charge of the settings.

Norton Crypto is included in every plan. The cryptocurrency mined by the software is Ethereum, and before it begins mining, Norton builds a digital wallet for each user. According to the documentation, the wallet’s digital key is only accessible to the user, is encrypted, and is stored on the cloud. To make withdrawals, users can transfer the contents of their digital wallets to Coinbase.

In the future, the business plans to introduce other currencies. Worse, this cryptocurrency mining feature is also not free. Norton will charge users 15% of the cryptocurrency that was given to the miner (user). Additional transaction costs may be incurred for the transfer of cryptocurrency (to Coinbase) between blockchain networks. You don’t even receive the benefit of the doubt.

The RAM, hard drive, and processor requirements are all rather modest, however, the graphics card requirement is somewhat high. So, while this shouldn’t affect the vast majority of users, if you have a 6GB graphics card, it will almost certainly be used to mine cryptocurrencies.

Is Norton Crypto by default enabled?

Although Norton Crypto is not enabled by default, according to the official website, several users say that the new version is installing the crypto miner without their permission. The antivirus, according to one Twitter thread, downloads a miner called NCrypt.exe.

Some users have indicated that after removing the Tamper Protection in the antivirus settings, it can be erased from the software’s directory. On HackerNews, there’s another interesting discussion about it.

How can I tell if my computer is mining cryptocurrencies?

If the system’s CPU or memory use is at 100% while no apps are running, it’s most certainly being utilized to mine cryptocurrency. Certain websites may also utilize your browser to mine bitcoin, which you may notice if your computer starts to sluggish.

Stop, install uBlock Origin, and try again if you ever come across such sites. Switch to a better antivirus as soon as possible. Windows Defender does an excellent job at the price of nothing, and it does it without slowing down your machine. Of course, this is just my opinion, so take it as you will.