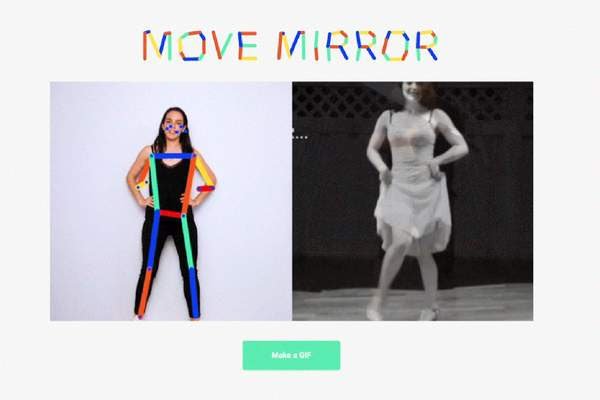 GIFs are all interesting and games when it comes to spicing up any conversation. Google has published a brand new AI experiment called Move Mirror, which matches your pose with a catalogue of 80,000 photos.

When you visit the Move Mirror website and grant it access to your computer’s webcam, it maps the positioning of your joints using a computer vision model called PoseNet. It then contrasts that against a massive library of 80,000 photographs, and returns the one that most closely matches your pose.

These are updated in real-time, meaning, as your body’s positioning changes, so too does the match returned by Google’s quirky little experiment. You can even make a GIF of your matches, for later social sharing.

It’s also pretty cool to see how commoditized computer vision technology is. Not only can we make sophisticated AI-powered websites sites like this for a joke (or, perhaps more fairly, as a technical demonstration), but it can run on the end-user’s computer — without the need to spend thousands on renting some high-end server iron.

In a blog post, Google creative technologist Irene Alvarado, said: “It feels like a magical mirror that reflects your moves with images of all kinds of human activity – from sports and dance to martial arts, acting and beyond.”

The technique involved in this experiment is called pose estimation. This is when the AI detects human figures in images and video so it can determine what’s an elbow and where it is, for example.

In the meantime, you can get grooving and know that you’re helping the advancement of technology along the way.