Tesla CEO Elon Musk hoisted the Giga Berlin county fair on October 10th. As per the traditional Tesla events, Elon Musk talked with the attendees, answered the questions, and shared a few interesting baits on the Giga Berlin and the future Tesla products. He also showed the “Giga Bier” a new alcoholic beverage. 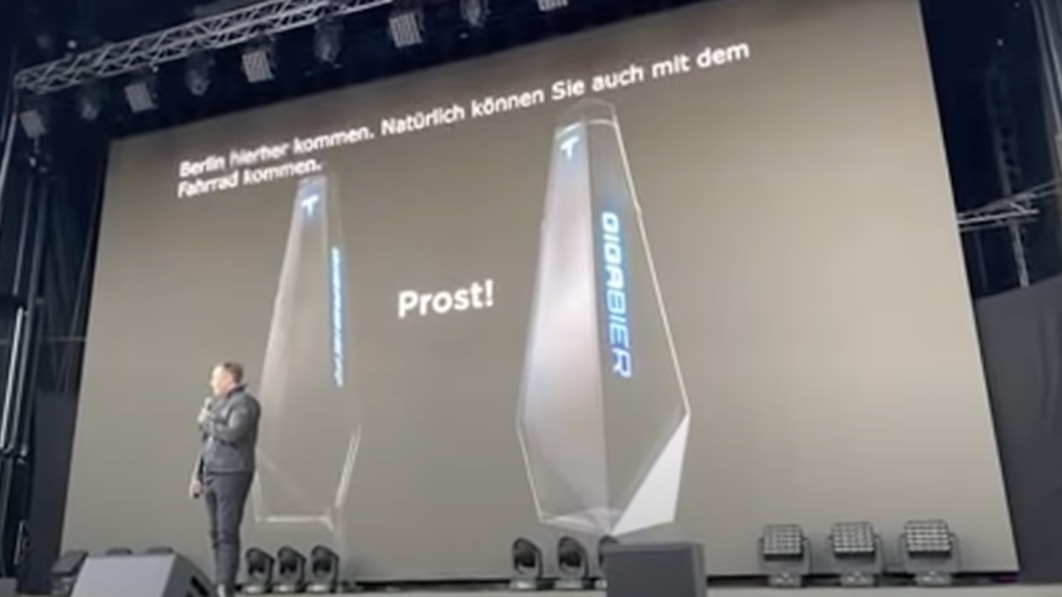 This Giga Bier bottle is inspired by the new Cybertruck appearance. It has the same sharp lines and angles which are similar to all-electric pick-up trucks coming in the future. While the image of the Giga Bier bottle was shown on screen, Tesla quoted “We’re gonna build a train station that’s right on the property. And then we’re gonna have graffiti murals all throughout the factory, on the outside and everything. So I think that’s gonna be pretty cool. We’ve got some of them already. And we’re even gonna have a beer.”

Recently Tesla brought out the Tesla Cyberquad, and electric ATV, which he said would be an Add for the Cyber truck buyers. Interesting thing is that the company filed the patent with USPTO (the United States Patent and Trademark Office) which makes Giga Bier its first product with Cybertruck design.

But the trademark filed with the USPTO was not for its ATV but the file was for the things, toys, clothes, sports goods that resemble the design of the Cybertruck. This might explain, that Tesla in the future will produce the items in a Cybertruck design. For now, Giga Bier became the first beverage that looks like the design of upcoming Cybertrucks. But the patent hasn’t included beverages, Gigabier is just a Cybertruck inspired item. This Gigabier could be considered as a character from Tesla’s love for Cybertruck for his own company. Along with Gigabier, there were also fun items, Tesla Short shorts, and The Boring Company Not-a-Flame Thrower was famous.

The Internet went crazy so many times when Musk released the merchandise, Playtoys, etc., which also helped the company to incline their stocks. Even these commodities are overpriced, people showed interest to buy for themselves which shows their craziness for Tesla. This is also a traditional way for any company, in releasing other products which aren’t related to the company in the first place, to create enthusiasm, and to promote their upcoming productions.

Evidently, Earlier this year Tesla launched a collectible Tesla Tequila lightning bottle which was another collectible from the EV company. Tesla enthusiasts and customers are always fond of whatever company moves a product into the market, they are ready to get it.