Google Maps is getting a new set of AI driven features

From time immemorial, maps have played a crucial role. If not for an almost accurate map and sense of direction, Columbus might not have discovered America or invasions of empires wouldn’t have happened. Over time, with a sprinkle of technological fairy dust, maps have transformed from normal paperback structures to a digital and much proficient representation of geographical locations. Nowadays, every other human in need of directions depends on Google Maps that it has almost become a second nature to humans. 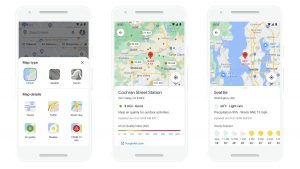 As per the latest announcement from Google, the power and efficiency of the maps could soon be channeled to indoor spaces as well. And behind these new updates that improve the intrigue of the application is artificial intelligence. The excitement evoked by Google’s latest blogpost regarding the new updates indicates the anticipation for the same. Among the updates, the point of highlight will be the indoor live view. According to the tech giant, this will prove to be a very ‘fine-grained tool.’

Google has already implemented Live View and it has been on the scene for a while now. This feature makes use of the abundance of the company’s Street view footage. This is then used to discern particular directions, which is then used to build an augmented reality (AR) directional tool by overlaying these over live footage from the camera.

Indoor Live view is the very same feature with the added advantage that it will also function in key indoor locations like malls, airports etc. This is a perfect example for how technology eases the creases of inconvenience, adding newer levels of convenience by bringing the world to your fingertip. With the help of this splendid feature, users can easily find escalators and elevators nearest to them, as well as gates, platforms, baggage counters so on and so forth. All these indicates that this is a granular tool.

The feature is currently available on iOS and Android apps, however it is operational only in certain malls in Chicago, Long Island, Los Angeles, Newark, San Francisco, San Jose, and Seattle. The coming months will see cities like Tokyo and Zurich added to the list, with other cities to follow track eventually.

In addition to this key feature, Google Maps is also being equipped with other important tools. One among them is the map layers which will provide useful information about the weather conditions and the air quality, assuming that a particular area has an Air Quality Index(AQI) station.

The weather layer will be globally available while AQI layer will make its presence known in US, India and Australia.

The environmental conscious users will be greatly pleased with the feature that helps them choose a route characterized by lower fuel consumption which in turn will considerably reduce carbon emissions. Google Maps will soon default to choosing the routes that are comparatively more eco-friendly, when the alternative routes has the same ETA. However, the user will be alerted if it takes longer. In both cases, the user will be informed about the percentage of fewer emissions caused by the trip. This feature will enter the scene ‘later this year’, initially in the US, followed by other countries.

From June, Google Maps will also introduce a new feature that will provide information to the user about low emission areas especially in global zones that enforce them. Initial implementation list includes Germany, Netherlands, France, Spain and the UK, with other countries to follow suit soon.

In addition to these feature, a lot more will be added to the iOS and Android apps in due course. This will include improved pickup and delivery details that will be of substantial help to service providers. Assistant Driving Mode will also be endowed with certain updates to sharpen and refine its effectiveness.