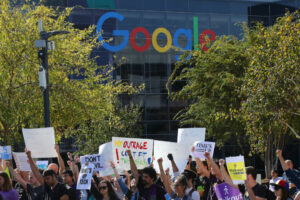 Google is finally ready to settle a National Labor Relations Board case which was filed by six former and current employees. These employees claimed that the tech giant had illegally dismissed or disciplined them for their part in unionisation efforts. The settlement was agreed upon on Friday, March 18. As a part of it, the former and current workers of Google have accepted to dismiss a court case connected to this in California. A lawyer representing them, Laurie M. Burgess specified that the terms are bound by a nondisclosure agreement.

It turns out, they reached the settlement following a ruling in the labor board case that pushed Google to submit more paperwork. The labor agency brought the complaint in December 2020. It stated that Google had illegally ‘fired or disciplined and surveilled’ the workers who played an active role in labor organising. The search giant, however, repeatedly claimed that their actions were not aimed at fighting the unionisation efforts. Moreover, Google said that the employees involved had violated security protocols. On Monday, a spokeswoman remarked how they were satisfied as all sides could avoid the long “legal proceedings.”

“We’ve always supported our employees’ right to speak about working conditions, and we stand by our policies that protect the security of our systems,” the spokeswoman added.

Additionally, Ms. Burgess specified that this settlement was not a loss. Owing to the years the employees devoted to combat Google, it was time for them to carry on with their lives. She referred to her client as the main bodies to expose the search giant’s actions. Masking it as crushing of unions, Google was organising activities much more than any other entity.

Essentially, this case exposed Google’s elaborate attempts to repel a harmless unionisation effort. Documents concerning Google’s hiring of IRI Consultants, an organisation known for its anti-union work, disclosed some details. The paperwork revealed how a lawyer from the company mentioned he wanted the consultants to guide him to show employees that “unions suck.”

An administrative law judge instructed the search giant to submit additional documents in January. These documents refer to the ones Google had held on to citing the reason of attorney-client privilege. Moreover, Google’s chief legal officer, Kent Walker received the direction to testify in the NLRB trial.

Out of the employees who brought about the case, Google dismissed four of them. The company disciplined the other two but, did not fire them. One of them still remains with the search giant. Crucially, as a part of the settlement, the four employees dismissed had to let go of their requests for restoration.