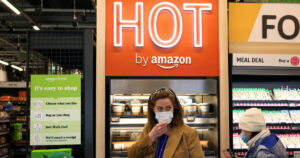 This week workers from an Amazon retail store have presented a list of demands to the management for better facilities. These are the same workers who were involved in the first union push at such an Amazon store. Currently, they are asking for benefits like better pay, an attendance policy with more flexibility, wider breaks, etc.

Apparently, they are summoning a federal labour board for the investigation of whether any labour laws were violated. This investigation is called on as in such an incident, Amazon had removed pro-union literature kept in a break room. They suspect that the employee who had kept it there was subject to “disciplining” for the act.

The largest part of Amazon’s retail empire to witness such labour activism is the Fresh grocery store located in Seattle, which is also the company’s hometown. Unionisation campaigns surround three Amazon Warehouses in the US, with votes scheduled to be concluded at the end of March at warehouses in Alabama and New York.

Amazon Fresh workers, particularly in Seattle, have turned in the demands for a better work environment, They are advocating for a starting wage of $25, subsidised discipline in case of absenteeism and tardiness, availability of chairs at counters and extension of more paid break. They are also demanding a more intense training on issues surrounding diversity, sexual discrimination and harassment. According to advertisements, the current initial pay for workers at these retail stores is $18.25 per hour.

“There’s already such a fearful work environment at Fresh. We wanted to have a different kind of narrative about our union.”

Other retailers in the country have also witnessed such intense labour organising. Workers at Starbucks outlets, more than 100 in number petitioned to form such unions. Similarly, retails workers at Apple Inc. also organised a similar inion. Some firms were actually seen to have raised wages after demanded by workers.Target has reportedly increased initial pay to $24 per hour. Chief Executive Costco also announced that most of their retail workers were making $25 an hour or more.

These workers are reportedly unionising without being affiliated with established unions and doing it under the moniker Amazon Workers United. This union was reportedly ignited last month when Joesph Fink, an employee reported that were subjected to discipline by a manager as someone posted pro-union literature at the break room. He filed the complaint to the National Labor Relations Board (NLRB). They, in turn, filed another complain this week accusing Amazon of removing their previous notice.

The Board required the company to post copies of this settlement including the information about the rights of the workers. The settlement was made public in December 2021 and risen from workers accusing Amazon of limiting their unionising rights. The Seattle Amazon Fresh employees had initiated the union through meetings over the past few months, and decided to go public in February.