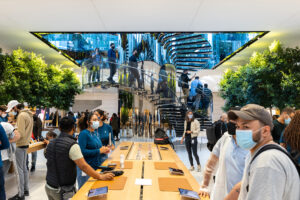 The Washington Post reported this week that Apple store employees seem to be planning to unionize, from many stores in the US. Apparently, groups of such workers from two stores in the US are preparing to file the paperwork. This is to be done with the National Labor Relations Board (NLRB) and, they are said to be backed by several major national unions.

Reports specify that the main reason behind the unrest among the workers are wages. Apple Inc. pays its retail employees within the range of about $17-$30 per hour. However, it also stands to depend on the employee’s role and seniority as compared to others.

The retail workers seem to be appearing dissatisfied with the rates. Their main concern lies in the fact that the amount do not keep up with the current inflation rate. It may also have risen as a reaction from these employees at Apple who feel that executive of the company, Tim Cook earns well enough to increase their salaries. Cook’s earning of $99 million in 2021 was the source of adversary among the Apple shareholders recently.

The wage rates Apple offers to its employees are mostly equivalent to payments offered at other retail jobs. Comparatively, they fall in the same line and was considered fair all this while. However, one cannot overlook the fact that Apple is among the top ten most successful companies in the world. These workers simply think that they should receive a greater share of the profits.

These developments are supposedly inspired by successful union votes that recently took place in more than 90 Starbucks stores. Reportedly, such efforts to unionize have recently risen and have seemingly taken place at US Corporations such as Amazon.com Inc.

The operations behind unionization are apparently taking place in secret to avoid any sort of retaliation from any form of the management. Nevertheless, one of the stores already have their managers initiating discussions. The discussions have been taking place talking about how the union will aim towards hurting current work conditions.

“Apple Store employees at one store said managers have already begun pulling employees aside and giving speeches about how unions will hurt employees, lower their wages and force Apple to take away benefits and opportunities, such as the “career experience” that Herbst described. Managers try to eavesdrop on employees, they said, while pretending to do something else.”

These unions are already said to be in order, according to reports. A few retails stores gave already witnessed employee walkouts on Christmas Eve. This was also said to have been in protest for better payments and other benefits for the workers.

Retail employees of Apple have also been submitting complaints regarding issues other than wages. Last month, complaints for opportunities for promotions into the corporate side of the firm were seemingly limited.

The union of the retail workers are occurring despite the benefits Apple had introduced this month. They had overhauled the benefits of these retail store workers which included increase in annual vacation days and multiplying the paid sick days.