Government Sanctions Armed CISF Forces for Reliance Jio World Centre in Mumbai This will be the third collaboration between Reliance and the Central Industrial Security Forces.

The centre has authorised the use of CISF personnel to secure the new built Jio World Centre in Mumbai.

The area, which is twelve times bigger than a soccer pitch and over ten times the size of the Empire State Building has been constructed in the Bandra Kundra complex in the economic capital of the country.

This is Reliance’s third infrastructure that goes under the security of Central Industrial Security Forces or CISF for short. Their IT Park in Mumbai and refinery in Gujarat were both granted access to the security in the past.

Anti- terrorist protection will be contributed by the 230 guards stationed at the centre which is set to commence by next week. After a comprehensive study done by the Ministry of Home Affairs, the CISF forces were called up to provide security to prevent the possibility of terrorist aggression. 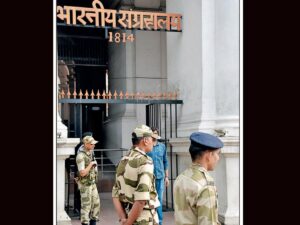 The centre is set to host many events in the future starting with the International Olympic Committee meeting in the summer of 2023. The country will be hosting the session first after four decades.

The centre is also set to observe huge waves of people entering and exiting the place on a daily basis. Employees, visitors and dignitaries will make up most of the people visiting the building.

Reliance declared and teased the debut of their centre saying it will open in stages from this year till the next one. A centre for culture, a musical fountain, bougee retailers, an eclectic set of cafes and fine dining restaurants, furnished homes and work spaces, and a state-of-the-art convention facility are all finalised to be part of the centre.

The main gates will be guarded by independent security forces supplied by a firm, which will also incur the costs for security and organize for accommodation and other provisions for the security personnel.

These are exciting times for both Reliance and India as not only does this benefit their company and brand, but would also definitely improve the economy of the country that has been pretty lack lustre to say the least. Not only are massive events being hosted in the buildings, but thousands of people will be employed either directly or indirectly with its construction. This is certainly going to help boom the Indian economy, but especially the Maharashtrian economy. No wonder professionally trained guards with utmost discipline who have undergone rigorous training are being employed to make sure this hub is safe and secure.