During her first State of the State address on Wednesday, New York Governor Kathy Hochul announced a $1 billion internet proposal. ConnectALL is a multi-part plan to improve the state’s broadband infrastructure and supply affordable high-speed data services. It is part of a much bigger “New Era for New York” goal. 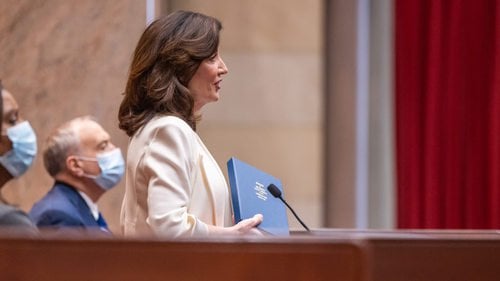 The new initiative will be funded by “a State investment of up to $300 million, boosted by $345 million in federal funding as well as hundreds of millions of dollars in additional federal funds from the [Infrastructure Investment and Jobs Act] IIJA,” according to details released by the governor’s office. The plan outlines numerous measures, including initiatives that are already underway, such as ECC Technologies’ compilation of a statewide broadband map.

Multiple grant program for municipalities and non-profit organizations for local broadband planning and construction; a program funded through federal infrastructure dollars and matching grants to support rural broadband access, including last- and middle-mile projects; and a new Connectivity Innovation Fund to support “creative, innovative, and new solutions that meet local connectivity needs” are among the other significant elements.

The state also wants to eliminate fees in places where the population is too low to generate enough cash to cover operational costs, in order to speed up rural deployments. “The State will exclude ConnectALL projects from use and occupancy taxes for fiber in the State right-of-way,” according to the plan, “lowering expenses for program participants.” However, a spokeswoman for the governor’s office told Broadband World News that these factors still need to be addressed through law.

The ConnectALL proposal also calls for the construction of a digital equity strategy that will take advantage of “substantial” infrastructure financing, although it is short on specifics.

Former New York Governor Andrew Cuomo indicated in his State of the State address last year that the state would address internet affordability by requiring ISPs to offer a $15 alternative for low-income families. The Affordable Broadband Act (ABA) was later passed by the state legislature, although it has been challenged in court by industry trade groups such as CTIA and ACA Connects – America’s Communications Association.

While Hochul’s ConnectALL plan aims to address affordability and digital equity, it focuses on enhancing competition and expanding New York’s participation in the FCC’s and Congress’s Affordable Connectivity Program (ACP). According to the ConnectALL plan’s specifics, ACP (formerly the Emergency Broadband Benefit, or EBB) participation “lags below 30% of eligible homes in New York.”

Jamie Hastings, SVP of external and state affairs at CTIA, said of the ConnectALL initiative in a statement to Broadband World News: “CTIA is pleased that Governor Hochul’s announcement today recognizes the critical role of wireless in closing the digital divide. We look forward to working with the Administration in the future to realise the goal of connecting all New Yorkers.”

ACA Connects did not respond to a request for comment. The Biden administration’s infrastructure bill will provide $100 million to New York, as well as every other state, to boost internet. The state will then be able to request for additional cash from the NTIA, which will be distributed based on need.