Sony Interactive Entertainment released a new GT7 trailer at its PlayStation Showcase 2021, showing the game cars, the track modification system, and much more. The digital version of the game for the PS5 will contain everything from the PS4 version. The event also revealed a release date for the game, which will be released on 4th March 2022. Today, the PlayStation Blog revealed Gran Turismo 7: Pre-Order Details along with information regarding the 25th-anniversary edition. 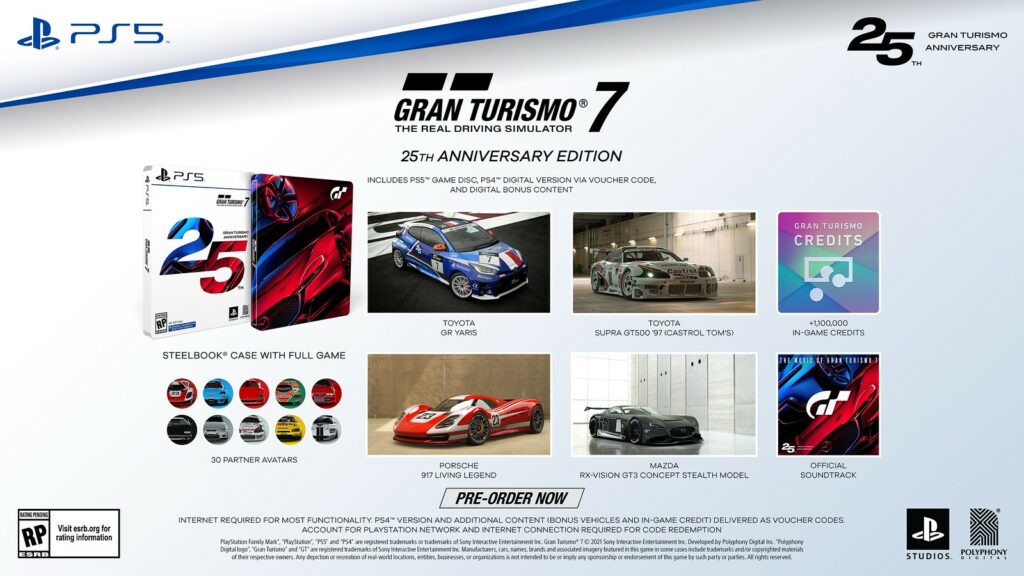 If you buy the disc version, you will earn $1,000,000 in-game credits while purchasing the digital version will earn $1500,000. 25th-anniversary digital Deluxe Edition (PS5, PS4) The 25th-anniversary edition of the game will also include the PS5 and PS4 versions of this game, along with game credits for the country Toyota GR Yaris livery. The PS4 disc version of the 25th Anniversary Edition will include the full digital edition of the PS5, but does not require a PS4 version, and will also include game credits for the country-specific livery of Toyotas.

Those wishing to upgrade the PS4 standard edition of the game to the PS5 digital standard edition at the time of release will also have an option for a digital upgrade. The Launch Edition has 3 additional cars – the Toyota Castrol Toms Supra, Mazda RX-Vision GT3 Concept Stealth, and Porsche 917K Living Legend – Upon purchase of the Launch Edition – as well as 100,000 in-game credits (or CR). 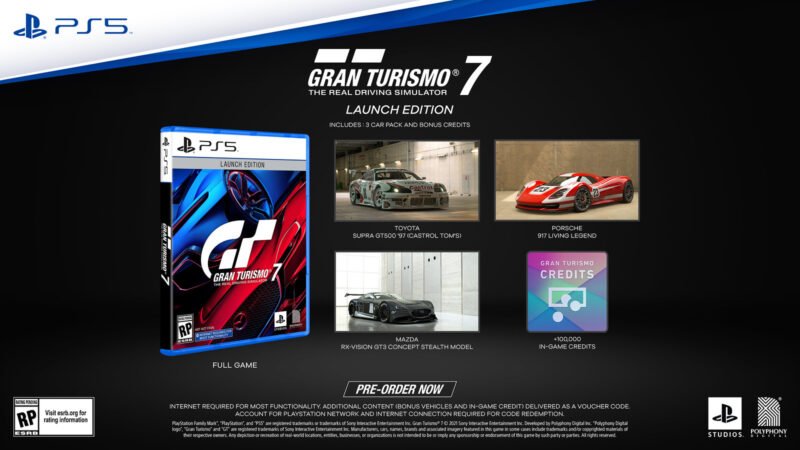 After speculation over the summer, it was confirmed that the long-awaited racing game Gran Turismo 7 for PlayStation 4 and the new PlayStation 5 consoles will be released. On the product information page, you will find details of the next chapter in Gran Turismo’s journey on the game consoles PS5 (TM), PlayStation (r), 4, and PS4 (r).

A new post posted on the PlayStation blog explains the pre-order bonus for a variety of editions of Gran Turismo 7 over the next few years. Pre-orders starting today (September 21) through Sony PlayStation Direct will reveal information about the 25th-anniversary edition for $89.99, which includes a PS5 game disc, a PS4 game voucher, $1,100,000 in credits for Toyota GR Yaris, country-specific versions from 30 manufacturer partners, avatar and soundtrack of Toyota, Castrol, Tom’s Supra, Mazda RX Vision, GT3 Concept, Stealth, Live Legend, and Porsche 917K. The long-awaited Gran Turismo 7 racing game was first announced when it was revealed to be exclusively for PS5 in June. PlayStation Studios CEO Herman Hulst said it would make sense to make the game available in the West to 110 million PlayStation owners along with God of War: Ragnarok and Horizon: Forbidden.

Polyphony Digital and Sony have revealed details of pre-order for Gran Turismo 7 which will cost players $10 to upgrade to PlayStation 5. Additionally, $10 for PS5 upgrades for PS4 players will be confirming. If you want to enjoy the game on PS4 or PS5, you should purchase one of the Deluxe editions or standard PS4 editions, as you will need to fork out extra money to play on the new PS5. Gran Turismo 7 made its most recent appearance at the PlayStation Showcase in early September and now the studio has revealed the details regarding the Pre-orders and deluxe editions.

The page dedicated to Gran Turismo 7 contains a long description of the game including details of the 420 featured cars and 90 tracks in the game itself, and there is an active pre-order link that players can use. Details of the soundtrack for the games have also been revealed, with each edition accompanied by a digital music album entitled Music for Gran Turismo 7.

A new trailer on Career Mode gives an early glimpse of a host of new features that enhance the GT7’s gameplay experience, including the return of the popular Trials of the Mountain Circuit, which has been converted after its long absence from the Gran Turismo Sport to a longer circuit.

Racing games may not have the same mainstream appeal as they used to do, but Gran Turismo remains one of PlayStation’s most prestigious brands and has helped drive large numbers of PS2 sales, so Sony is clearly hitting the jackpot while the iron is hot. Sony Executive Vice President Simon Rutter said he thinks Gran Turismo 7 will be a showcase for the PS4 details and will be Sony’s first to delight gamers with the new technology of PS5. As for GranTurismo Sport, developer Polyphony Digital is focused on cultivating an environment where competitive simulation racing thrives – a departure from the Single-Player Cars and PG experience that first made the franchise famous.