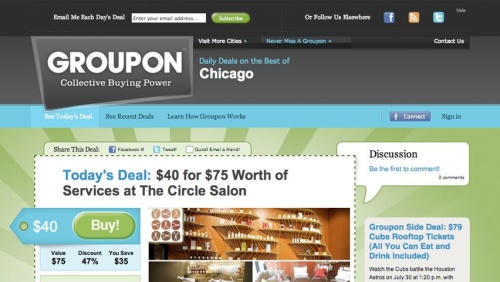 12 February, 2016, USA: Groupon has performed way better than expected. Its earnings scaled to 23 per cent in initial after-hours trading, following a better-than-expected fourth quarter earnings release. Market experts were speculating that it will generate revenue around US $846 million but the company had put all the speculations aside and generated revenue of US $917 million and a nine per cent year-over-year increase.

In its recent move, company has promoted Rich William as Groupon CEO in November and this ace move had played a vital role in enhancing its profitability. Williams has channelized the efforts of the company in right by closing up shop in underperforming markets. “We need to win where winning is material. ‘Groupon’ made the hard call to allow the team to focus on what really matters,” Williams told media.

Company stated in a statement, “85 per cent of its business comes from its top ten markets. Food, beauty and events remain the most popular categories in these regions. Most customers purchase the Groupon coupons on mobile.”

“Right now Groupon is focusing on the cities where it performs best and the goal is to increase our customer acquisition and customer growth,” Williams adds.