Harambe statue appears in front of the Wall Street with 10,000 bananas 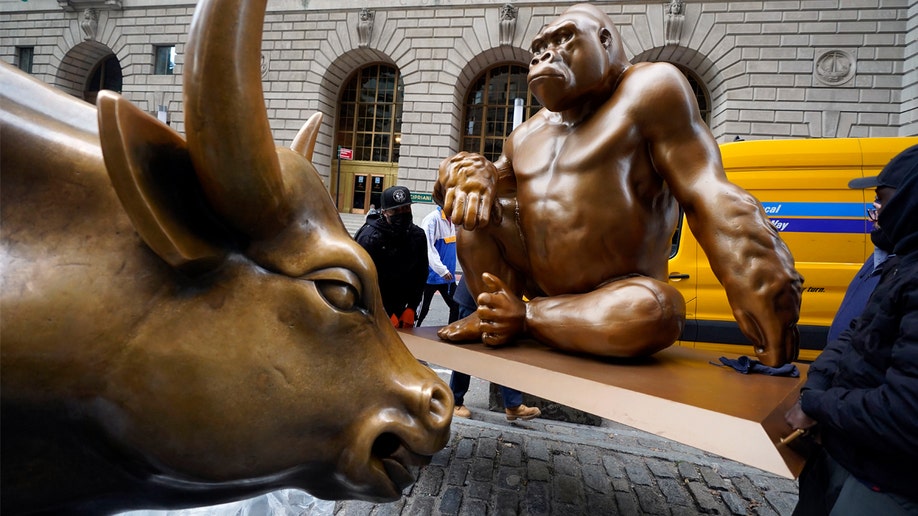 Recently on Monday, Wall Street was seen with a bronze statue of Harambe, the gorilla that was shot dead at Cincinnati Zoo, standing 7-feet tall, and surrounded by 10,000 bananas. What does this mean? We are not sure but what it symbolises is what we think we are aware of.

Harambe was a gorilla of the Cincinnati Zoo that shook the internet back in 2016 after it endangered the life of a 3-years old boy because of which the zoo officials had to kill Harambe with a bullet shot within its enclosure. The life of the boy was saved but the killing of Harambe made waves across the globe.

Someone put a huge Harambe statue in front of the Wall Street bull today.

Not sure what it means, but we know one thing: apes strong together.

According to recent reports, a statue of Harambe was seen installed at Bowling Green Park, Wall Street, opposite the Charging Bull statue, and that too surrounded by over 10,000 bananas. What does this mean and who did this? Well, first things first, the 10,000 bananas will be donated to local food banks and community fridges, so food will not be wasted.

Now, let’s get to who installed the 7-foot Harambe statue in the middle of Wall Street, it was the organizers of the “Sapien Network” a deemed to be social media platform. Reports suggest that the 7-feet Harambe statue was installed to show that Wall Street is now bananas and completely disconnected to the needs and wants of the common citizen. The Sapien Network is dedicated to the needs and welcome of human beings first, as noted in a report by Indy 100.

Harambe has never left us. RIP to the king https://t.co/e6EqFDjXGI

“Harambe is a representation of something that lets us look at more than just ourselves…A simple gesture of giving a banana builds community. As a society, we need to come together. We can’t keep fighting to come together,” says co-founders of the Sapien Network initiative, namely- Ankit Bhatia, Robert Giometti and Tejay Aluru, during a conversation with NBC News 4.

So, now we know the reason behind why they first had a big 7-feet tall bronze statue of Harambe custom made and then installed on Wall Street. The main idea was to grab people’s attention and remind them that people need to stop fighting to come together and that Harambe’s death incident was a shake to humanity. Why the 10,000 bananas? Well, to what we see in multiple reports, the co-founders say that a simple gesture of giving a banana is enough to represent and build a community.

However, what is the connection of this incident with Wall Street and why only an ape’s statue?

Well, Wall Street has its own sayings and having this installed in Wall Street might have another meaning, or at least it has another representation as a symbolic entity. There are several Twitter users tweeting “Apes Together Strong” which is a saying in Wall Street.

“Apes Together Strong” is derived out of a meme based on the movie- “Rise of the Planet of the Apes”. When this phrase is used by WallStreetBets, it usually means that the apes are retail investors who are bullish about heavily- short stocks. If the apes are united, they are strong enough to outlast those short on the stocks, as explained in a report by Investopedia.

The killing of Harambe, the tragic death of a Cincinnati Zoo gorilla-

It was May 28th, 2016 when a three-year-old boy climbed the fence and fell into the gorilla enclosure. Harambe picked the baby up and started to play with it or move around with it and then started to drag it around. The incident took place at the Cincinnati Zoo, Botanical Garden.

Harambe was 17 years old and was shot dead by a zoo worker to save the child’s life. The gorilla died the very next day of his 17th birthday. The incident was reportedly recorded on camera and received mixed reactions from all across the globe. There was international coverage, talks, news and commentary from all corners of the world. Some were in support of the zoo worker for killing Harambe and saving the child, while others were against killing the poor gorilla.

Harambe, the famous gorrila who was killed after interacting with a 3 year old boy, has now become a symbol of wealth disparity after, becoming immortalised as a statue opposite the Charging Bull.
That's novel!#Harambe #WallStreet

The zoo managers and conservationists wrote in a letter that the zoo had no other option than to make use of the lethal force. The three-year-old boy was in danger and at the time when the bullet was shocked, the boy was between the gorilla’s legs.

The boy, on the other hand, was saved and was sent to Cincinnati Children’s Hospital Medica Center to get checked up but fortunately, there were no life-threatening injuries.

This was the story of Harambe, the gorilla’s statue that was installed on the Wall Street