Robots are used in a lot of industries to carry out a wide range of tasks. Such robots have to go through a lot of tests in order to be certified as safe and effective. The models that these robots work on, usually function quite well when it comes to the controlled environment of the laboratory.

However, situations can always take place where even the best of the models of robots can prove to be inadequate. Whenever faced with difficult tasks or required to carry out a completely new function, especially when it comes to handling of soft materials, robots are expected to be unable to deliver.

In order to address this problem researchers at the University of Michigan have developed a new system for the robots. This new system enables the robots to predict when they cannot trust the model and also allows them to recover when they realize that the model is unreliable.

Peter Mitrano who is a PhD student of Robotics said that, “We’re trying to teach the robot to make do with what it has.”

They further added that, “When a robot is picking things up and moving them around, it may not know the physics or geometry of everything. Our goal was to have the robot still accomplish useful tasks even with this limited dynamics model that characterizes how things move.” 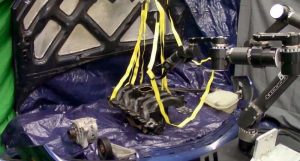 The team of researchers tested the model by creating a simple model of a rope’s dynamics and was moving it around an open space. Once this was done, the team added obstacles and a classifier was created. The classifier was able to learn when this simple rope model was reliable. However, the classifier did not attempt to learn about the more complex behavior about the rope and how it interacted with the objects.

The team then proceeded to add up recovery steps in case if the robot is faced with a tricky or difficult situation. The classifier was then able to predict that the simple rope model created by the researchers was an unreliable one.

The researchers then went on to test their simple model, classifier and the recovery approach against a state of the art full dynamic approach. The task given was to drag the rope to a goal position and the path was full of obstacles. The team’s method was able to succeed 84% of the time compared to the full dynamic model which was successful 18% of the time.

Dmitry Berenson who is an Associate Professor of Electrical Engineering and Computer Science and also a core faculty member at the Robotics Institute said that, “In our approach, we took inspiration from other realms of science and robotics where simple models, despite their limitations, are still very useful.”

They also added that, “Here, we have a simple model of a rope, and we develop ways to make sure that we are using it in appropriate situations where the model is reliable. This method can allow robots to generalize their knowledge to new situations that they have never encountered before.”