The war between Ukraine and Russia struck the global news and shocked everyone around the world. According to the reports, the war was also one of the main reasons for the crypto markets to plummet and crash like it did. The situation for both the countries is not good while the market is still trying to revive itself from the market crash.

It has been observed that, the crypto community has come in support of Ukraine and has helped and aided the war battle of Ukraine. According to the reports, in the first week of March, $6.75 Million was raised by a crypto group, by selling an NFT of the Ukrainian flag. The Eurovision champions, Kalush Orchestra from Ukraine, also went on to auction their trophy from the music competition. They helped in raising almost $1 million in Ethereum for the fund.

CryptoPunk #5364 comes in as a donation for the country. 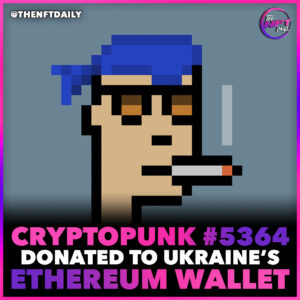 In March, amidst the war with Russia, Ukraine received a donation of an NFT called CryptoPunk #5364 from a fundraising campaign. The NFT was sold recently and Alex Bornyakov, who happens to be the country’s deputy minister of digital transformation, went on to announce the sale in the tweet.

Breaking news on crypto donations: #CryptoPunk #5364 has been sold for 90 ETH. It’s over $100K. Few months ago this NFT was donated for @_AidForUkraine fund. Crypto community continues to support Ukraine.

A massive amount of crypto donations has funded Ukraine.

As soon as the country made its wallet public in February, Ukraine has been able to raise approximately around $135 million in crypto donations. The donations have surely given a hope for the country to fight the battle and emerge victorious.

The funds that are being donated by crypto community are put in use to provide vital essentials which include food for civilians, protective gears for country’s soldiers. The president of Ukraine, Volodymyr Zelenskyy claimed that digital assets have the potential to bring about an economic breakthrough in the countries such as Ukraine, and nullify the threat posed by Russia to the banking system of the country.

Ukraine and Russian war is certainly affecting the crypto market. But, it is heartening to experience that the same community hit by the war is coming forward to aid and support Ukraine and help them battle the war out.