Holding Hands from Beyond Borders to Fight The Pandemic Bret Lee donates bitcoin for India's fight against COVID-19, following the path of Pat Cummins 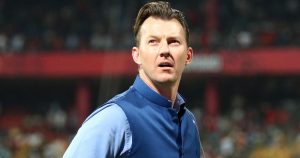 The second wave of the pandemic has made India stumble, threatening to shake its foundations, wreaking havoc and misery. While on one side we are struggling to keep up with this catastrophe, fighting to survive, on the other side, gestures of support and help are flowing to the country from around the world. It is heartwarming to see that we are not alone in this fight. Countries like Germany, China, the US, UK, and even Pakistan have extended support and help and world leaders and MNC’s offering help.

On Monday, Australian cricketer, Pat Cummins, in a heartwarming gesture, won millions of hearts by announcing a donation of $50,000 which will go towards the PM CARES Fund for covid relief. The donation will be used to acquire oxygen supplies in the hospitals that have turned into battlegrounds in the wake of the deadly second wave.

Following his lead, Brett Lee, the cricketer turned commentator, decided to help India by donating one bitcoin, which amounts to approximately Rs 40 lakh.

“It saddens me deeply to see people suffering due to the ongoing pandemic. I feel privileged to be in a position of making a difference and with that in mind, I’d like to donate 1 BTC (Bitcoin) to Crypto Relief to help with the purchase of oxygen supplies for the hospitals across India,”  said Lee’s post on Twitter.

He also mentioned the warmth and love he received from India during the time of his career and retirement which makes India a second home.

Lee also thanked all the people working together to fight the pandemic and also urged people to stay united and extend support to those in need, while also not forgetting to be responsible and cautious. He did not forget to thank fellow cricketer, Pat Cummins for the creditworthy initiative which inspired him to take the same path.

The announcement was made on Tuesday, and one bitcoin was trading at above Rs 40 lakh on Tuesday evening. Lee lends a hand of support and help to the country even though bitcoin isn’t legal tender in India.

Brett Lee was one of the fastest bowlers, and at present, he is a part of the IPL commentary panel. During the course of his career marked with immense success, he represented Australia in 76 Tests, 221 ODI’s, and 25 T20Is.

The gesture attracted a lot of praise and gratitude from Indians and people around the world who praised Lee for his act of humanity and generosity during a very tough time. People were also impressed by the depth of camaraderie exhibited by two Australians, which underscored the fact that even in the darkness it is possible to find a flicker of light.