Home Helper Robot by Samsung Ball Shaped, Can be Your PA

The dynamic world of robotics always has something new to present to us. With constant updates in technology we have been seeing rapid developments in the field since the past few decades. Robots have been used for jobs which are either too dangerous or require extreme levels of precision. Also compared to humans robots can withstand extreme temperatures, making them an ideal candidate to carry out tasks in areas with such climatic conditions.

Along with all this, as time passed, humans have been incorporating robots into their lives. There are robots to carry out household chores and activities. Tech giant company Samsung has introduced a ball shaped robot named Ballie which is shaped like a ball. This robot is capable of carrying out tasks and also serving as the user’s personal assistant.

Following it’s launch, many people had interesting reactions to this robot.

Bret Kinsella said, “simple request-and-response interactions of earlier social robots and smart speakers. Demonstrations of Ballie show it identifying problems in the home such as spilled food and a tipped over plant. In both cases, Ballie proactively called a robot vacuum or air purifying system to the location of the problem. There was no requirement for the homeowner to take action or even know an issue had taken place.”

The robot, Ballie, is capable of carrying out various tasks. It can connect with other smart home devices such as vacuum cleaners and can also turn on the television set. Interestingly, it also keeps the pets amused. It can also detect if there is something spilled on the floor and turn on the vacuum cleaner in order to clean it.

Ballie follows its user around and is capable of controlling its speed to keep up with the user’s pace while keeping the appropriate distance. HS Kim who is the President and CEO of Consumer Electronics Division, Samsung Electronics made an interesting statement, “I love this guy. He even knows to give me a little space.”

Kyle Wiggers said on ‘VentureBeat’, “Ballie’s on-device AI enables it to serve as a fitness assistant, as well as a sort of interface that seeks solutions to various wants. It acts as a security robot, patrolling rooms at night and when folks are away during the day, and it can follow an elderly member of the family around and call for help if they suffer a fall.” 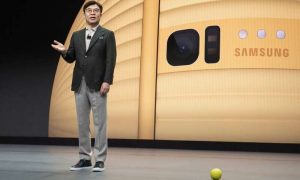 Ballie can have more than one benefit. Since it is capable of following people around while keeping an appropriate distance it can serve as a safety device while taking care of the elderly. Incase due to any misfortune they suffer a fall or injure themselves, Ballie can ask for help.

Similarly, it also provides security benefits and can take care of the house when the owners are not there. Since it is quite small in size, just as big as a grapefruit this robot has a quite friendly look to it which makes people feel at ease around it. Also since it looks like a ball, the pets in the house are guaranteed to be occupied and have a good time.

The field of robotics and robots has come a long way when it comes to making things easier for humanity. It will be interesting to see what’s next.