Professor Otto Gregory at the College of Engineering from the University of Rhode Island along with Peter Ricci, a doctoral student of chemical engineering have developed a new sensor which is capable of detecting threats at molecular level. These sensors are capable of detecting molecules from explosive materials, illegal drugs or if they are particles from a potentially deadly virus.

These sensors are small in size and extremely powerful. This allows them to be incorporated in a wide range of applications. These sensors can prove to be quite useful when it comes to combating threats which affect people’s health and safety.

Professor Otto Gregory’s research was funded by the Department of Homeland Security. But these powerful sensors have also attracted the attention of the other government agencies who have now taken a notice of this research.

These sensors can prove to be beneficial to monitor wounds that are suffered by the soldiers. They are capable of determining if such wounds possess a threat of being infected.

While explaining the process Peter Ricci said, “Hydrogen peroxide generated by the human body for wounds is an indication of how good or how bad antibiotics are working to fight the wound.”

He added, “Our sensor could be used as a wearable device to sniff out peroxide coming from the wound at the part-per-billion level.” 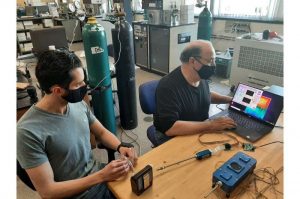 These sensors are the smaller version of the ‘Digital Dog Nose’. The system that was once the size of a toolbox has now been reduced to a quarter of the size of a pack of cigarettes. In order to make this device smaller in size and also powerful, they needed the right kind of battery. Professor Otto Gregory said that, “We have partnered with a company that makes very thin, low-mass batteries in Colorado called ITN Energy Systems. They make lithium batteries that are no thicker than a piece of paper. The process has been about finding the right partners, which helps us improve our catalysts and improve our sensor platform.”

The original research by professor Otto Gregory was funded by the Defence Advanced Research Projects Agency (DARPA) 20 years ago. After two years of funding by DARPA, the project was funded by the Army for a year. After that, the Department of Homeland Security has been funding this project.

Since these sensors are quite lightweight and small in size, they can be attached to many applications, particularly to drones in order to identify the security and health threats at a molecular level. With adequate funding, these sensors are all ready to be used into the real world given how effective they have proved to be.

For future developments, Professor Otto Gregory and Peter Ricci are working on sensor arrays. These arrays will be useful in differentiating one explosive or threat from another.