When Mark Zuckerberg announced the rebranding of Facebook as Meta, little did we have any idea how fast the Metaverse would grow into a reality of its own. It has been less than a year since October 2021 when the official announcement was made but people have been quick to adapt to the changing technology and the endless possibilities of the Metaverse. It was thought that the general public as well as the developers might take some time to figure out how this technology actually works but the pace at which the metaverse is becoming popular indicates how simple and user friendly it is. But, what exactly is the metaverse still remains a very popular question for a vast majority of people out there. Let’s define metaverse first before we move on to Hyperverse and how you can access it.

What is the Metaverse?

Have you ever seen the 2009 James Cameron masterpiece Avatar? Jake Sully (Sam Worthington) uses an avatar based technology to interact with the people of the imaginary moon Pendora and get the US government what they want. He experiences everything his avatar does: being hurt, feeling pain, falling in love, etc and has all the memories of his avatar when he comes back to his normal human form. The term metaverse isn’t relatively new. It was first coined by Neal Stephenson in his 1992 sci-fi novel Snow Crash, at a time when the internet was still growing and a technology like this seemed impossible to exist in the next century. The technology often gets confused with video games but in reality, metaverse is a second life that a person can have digitally and can decorate as they want. Have you come across the game Second Life? Here’s a YouTube video that’ll help you get around how the game works. Watch closely and let us know in the comment box what elements do you find similar to that of the metaverse.

The Hyperverse is a new and thriving virtual metaverse that is based on a multi-planet universe. It encompasses several million planets where the users can explore, settle down, do business, engage in community activities and several other ventures that they can do in real life as well. It is set in the year 2078 and is based on the idea of humans having mastered the technology of interstellar travel, giving more life to the multi-planet exploration concept. The users or players are referred to as voyagers (pretty good detailing there right?) and they can connect with their friends and go on adventures together.

The platform requires users to create their avatars and build a life around them. Now, it sounds intriguing, we know. But the question here is, how can one access the platform, have their avatar created and get started with the endless possibilities that this metaverse has to offer. Here’s a step by step guide to accessing the hyperverse:

Step 1: Fire up the web browser (preferably Chrome or Firefox) on your system and type in www.thehyperverse.net into the address bar as shown in the screenshot below.

You will be redirected to the official hyperverse website with a cyborg-world theme.

Step 2: Click the blue coloured login button at the top of the screen. You can also review the Whitepaper of the platform using the button next to it.

A new page will appear with two options, register and login.

(Note: From here on, you can access the website in six different languages including English, Hindi, Nepali, Spanish, Portuguese and Chinese.)

Step 5: Once you’ve created your account, the next step is to confirm trading details such as transaction passwords. Complete the rest of the process and close all the tabs.

The following screen will appear:

Step 7: Enter your username and password that you just created. Verify you’re not a robot (sometimes the platform might prompt you to do it more than once).

Step 8: Click on the membership button and select the type of membership that deems best in your interest.

Once you’ve purchased the desired membership, you’re good to go. You can now create your assets or purchase those created by others. You can also trade in other crypto currencies  such as ethereum, bitcoin, etc.

Is Hyperverse a Viable Option?

Hyperverse is one of the best platforms out there for users to engage in the metaverse. Hyperverse has been of great use to the art community in the post-pandemic world. When on one hand people are still recovering from the shocks of the deadly virus and avoiding public events such as art demonstrations, concerts, recitals, etc; Hyperverse on the other hand is giving artists an opportunity to connect with their fans on digital grounds and organize events as well as disperse NFTs to them digitally without running the risk of catching the virus.

However, the Hyperverse metaverse is not free from acquisitions either. The platform has been accused of being a scam time and again on different social media platforms and has been a center of financial debates across the West. There is even a Facebook Group by the name of ‘Hyperverse is a Scam’ with approximately 170 members. The group admin has assumed it to be his moral duty to warn people regarding the money being exploited by the Hyperverse team. The Mirror, one of the largest news platforms across the United Kingdom, called the platform a crypto-nightmare and advised people against investing their money in it. Many people are claiming Hyperverse to be a Ponzi Scheme, in which the business pays its existing investors using the new capital coming in through new investors instead of paying from the profits the business generates. Of the many allegations against the Hyperverse, another major one is the claim that the customer service of the platform is practically non-existent and a user may get a reply only after generating several tickets. Here’s how some people have reacted to the allegations on Twitter: 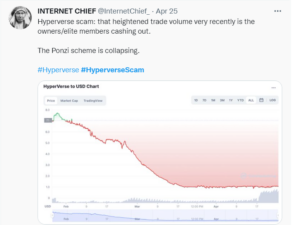 Whether or not the platform is legitimate is unclear at the moment. There are thousands protesting against the Hyperverse but there are millions who trust the platform and have invested their money into it. You can access the platform with the help of the steps given in the post above. We wish you safe trading.