Social media giant Instagram has introduced a new feature: the ability to include one’s personal pronouns in their profile. You can choose up to four pronouns, which will be seen next to your name in grey when someone views your personal profile. Users are able to change or remove their pronouns at any time they want, and can choose whether their pronouns are displayed publicly or only to their followers.

Prior to the introduction of this section, users would manually add their pronouns to either their bio or to their display name.

If you wish to add your pronouns, open the Instagram application on your mobile device and go to your profile. Click on “edit profile.” Tap on pronouns, and start typing. A list of suggestions will appear below. Each one you tap on will be added to your profile, with a maximum limit of four pronouns. 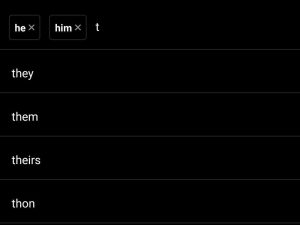 However, Instagram has received criticism due to the fact that you can only choose pronouns from the given list. The company has said that the list will continue to be updated over time, and has encouraged people to share suggestions for more personal pronouns. In fact, if someone wishes to do so, they can submit a form to Instagram with their pronoun request. As of now, 41 pronoun options on the list.

The move has received praise from several sources. Gay & Lesbian Alliance Against Defamation, also known as GLAAD is an American organisation founded as a protest against defamatory coverage of LGBT people. It was also one of Instagram’s key consultants when forming the list. According to a spokesperson from GLAAD, using pronouns in one’s bio can normalise the entire concept of sharing personal pronouns, and can help develop a more trans-friendly environment on social media.

Other companies are also either following suit or have done this before. LinkedIn has made an option for users to add pronouns to their profile available. However, unlike Instagram, LinkedIn does not use a set list. Instead, it allows users to freely type their choice of pronouns.

Several other platforms already allow users to include their gender identity in their profiles, including dating apps, such as OkCupid, and rideshare companies, such as Lyft. Facebook has allowed users to share their pronouns for years, but its options are limited to he/him, she/her and they/them.