How to change language on iPhone

There is no need to reset the iPhone to change the language if you set it during the setup procedure. When you select a new language, your iOS device will automatically load the new language settings, and you’ll be able to use it in seconds. 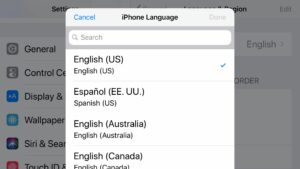 How to Change Siri’s Language

How to Switch Languages for the iPhone Keyboard

The iPhone’s keyboard should automatically swap over, but if it doesn’t, you may add the new language to your keyboard options. You may also change the keyboard’s language between two options.

The entire procedure takes only a few minutes, and once done, all text in menus and applications that support the language will show in the new language. Changing the language option also changes the language for the iPhone’s keyboard, but you can still have rapid access to accent characters for other languages.

You are not limited to American English because the iPhone supports over thirty languages and dialects within each of those languages. You can also choose English from the United Kingdom, Canada, or Singapore. Alternatively, you may select from French or Canadian French, Spanish or Latin American Spanish, Portuguese or Brazilian Portuguese, and so on.