Clubhouse is an invitation-only social media application where people can discuss a topic and have up to 5,000 participants who can listen to others and talk among themselves. It first began last year when the Covid-19 pandemic induced several nationwide lockdowns. With people stuck indoors, Clubhouse became popular for its unique product focus and features that were quite similar to the way the world of podcasts was built. The only difference was that anyone could pick up their phones and start talking without having to think about any privacy concerns.

The biggest reason for the popularity of Clubhouse was its exclusivity, as it is only available through an invite. Social media networks were full of people asking for Clubhouse invites. In fact, those who got in were openly willing to distribute their Clubhouse invites, which helps their account gain both reach and featured access.

That being said, Clubhouse’s popularity really skyrocketed when Elon Musk decided to host a room on the platform. Musk was candid about his opinions on different matters, such as space travel, settling colonies on Mars, artificial intelligence, and the COVID-19 vaccine. The session was such a major hit that a lot of people thought of it as a PR exercise from Tesla. However, largely due to Musk’s involvement, Clubhouse took off to new levels from that point onwards.

The unique thing about using Clubhouse is that not everyone gets an account just because they want to. The invite system has been cast as a hype-building machine, which is not new. Many companies have done this before. But this tactic has proven to be successful, and the user activity and engagement for Clubhouse are a clear sign of that. Clubhouse invites can be yours too, but there are certain things to know beforehand. 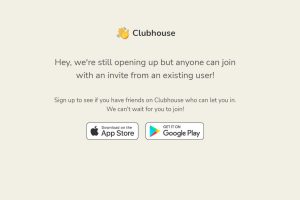 You have to follow the same process for both iOS and Android mobile devices. Currently, Clubhouse is available on both.

Looking to grow your clubhouse? Checkout buy followers on Clubhouse