Apple Music has been giving competition to several music-streaming apps, such as Spotify and Wynk, with its incredible and novel features. One of these is CarPlay, which has been a massive hit among users of Apple Music. However, many Apple users have been reporting problems with the CarPlay feature, saying that they are unable to play music at all. There seems to be no way around this problem, and as a result, many people are wondering about what happened to the Apple Music CarPlay feature. 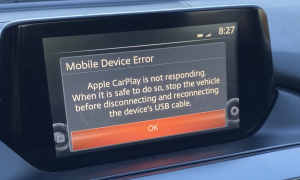 Many users have been reporting on various social media websites that Apple Music has been crashing many times during CarPlay. However, some tech enthusiasts think that this began happening after the latest iOS 14.5.1 update to the iPhone. The operating system works perfectly fine, but when connected to Apple CarPlay, it ends with a crashing app and takes the user back to the home screen. This issue has been causing a lot of confusion with the users, but there is no solution or a hack to solve the issue until Apple itself recognises the problem and releases a solution.

As mentioned above, Apple Music’s latest issue does not let users play music when they connect it to CarPlay. But several tech enthusiasts have suggested a solution, albeit a tricky one. According to many users, the Apple CarPlay feature works well when activating it in the Airplane or flight mode. Though you may not be able to use the internet to enjoy your favourite songs, you will still be able to listen to any downloaded songs in Apple Music while you are driving to and from anywhere. However, if you turn off the flight mode, the app will end up crashing and will take you back to the home screen.

There is another solution that works, but is highly inconvenient. You can try to disconnect CarPlay altogether and instead, simply play music from your iPhone. While not ideal, it may be the only way to stream Apple Music in your car for now.

Besides this, Hits Daily Double, a popular American music industry trade publication, revealed that Apple is planning to introduce a new high-fidelity audio streaming tier to Apple Music in the coming few weeks. The Apple Music HiFi plan is said to continue with a similar price point as its individual plans. This means that it is estimated to be $9.99. HiFi is basically a high-resolution music streaming system that will bring CD-quality audio to your mobile devices. Furthermore, the announcement is expected to coincide with the launch of another Apple product, AirPods 3.