How to identify music with your iPhone or iPad?

Everyone has a list of favorite songs too. It’s often said, a playlist defines a person. From doing household chores to hanging out with friends, music is extremely important.

Long gone are the days, when to keep a song with you, you had to make a purchase. With internet availability almost everywhere, now you can just stream it anywhere, anytime. Now, Is there a song in your head stuck on repeat, you want to listen to it but can’t remember the name of it? Or a music is playing at party, and you really want to know which one is it?Well, all your problems are taken care of in this blog. Because iPhone can listen to any song playing nearby and detect which one it is! Having an iPhone already offers many luxuries, one of it is- multiple song identification tools right in it.

Here we will tell you how the music recognition feature in an iPhone works. You just have to make your phone listen to the music, and it will take care of all the technicalities. Ask your phone to listen to the song and it will be all ears but with the microphone. The song data that iPhone listens to is then uploaded to a server where it matches with the known song.

Identify the song playing with Siri 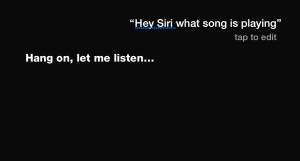 Ask Siri what song is playing

Siri is the virtual best friend for apple users. From helping you call a friend when your hands are busy to getting you information, Siri is unbeatable. Well, in a case when you want to know a song playing nearby, it can be a saviour too. Here is how to get you ‘your’ song with Siri-

With the all new iOS 14.2 and iPadOS 14.2 update, you can use Shazam with its quick Control Center button to identify a song. But, you have to manually add the button since is it not enabled by default.
You can do so by following some simple steps- Reach to the control center and then later to control center. In a tap, add the ‘Music Recognition’ button to the control center. Tap on the plus sign to its left.

When you add the button to your control center, you can use it by swiping down the control center. Activate the Shazam button with a simple tap on it. When Shazam icon lights up and pulses, you should know that it is listening to the music around you.

Once Shazam listens to the music, it will pop-up with the ‘Music Recognition’ notification showing up.