How to register as a CEO in GTA 5

Since the debut of their Grand Theft Auto franchise, Rockstar Games has become one of the most well-known game publishers. GTA 5 is their most recent game, and it is one of the most popular games worldwide. Players may choose between two main gaming modes in the game: narrative mode and online mode. 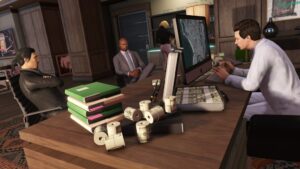 However, a large number of gamers have been inquiring about the game. Players have been pondering issues such as “How can I register as a CEO in GTA 5?” While purchasing an executive office in GTA 5 online, a suitable instructional tab appears in the game. If you still can’t figure out “how to register as a ceo in GTA 5,” check out our step-by-step guide to becoming a CEO in GTA 5. Here are the steps to becoming a CEO in Grand Theft Auto 5.

After purchasing an Executive Office, a player can become a CEO in GTA Online. The player’s in-game phone may be used to acquire these offices through the Dynasty 8 Executive website. To buy an office, they’ll need a minimum of GTA $1,000,000. Here are some of the offices available in GTA 5 to help you become a CEO:

Following the purchase of the executive office, the player will be given a variety of customising choices. They can equip their workplaces with amenities like as a gun safe, living quarters, and furniture. The players will also be able to engage an Executive Assistant to help them with all of their tedious chores, such as picking them up and dropping them off at their workplace for free.

The executives also assist with tasks such as ordering lunch and contacting Pegasus to purchase or check on their car. Gamers can also give their organisation a name and recruit Associates from other online players. After spending more than GTA $1,000,000 on an office, the player will undoubtedly receive a variety of benefits in GTA 5.

The advantages of being a CEO in Grand Theft Auto 5