How to track lost Android phones like Apple’s Find My

Google is starting to work on a network of Android phones. The company is developing a new type of technology through its global expansion of the Android Earthquake Alert system. Google is in the process of creating a network powered by Android phones, a network where all the devices will be connected within a network allowing each other to trace, locate, and identify. This will help Android phone owners in the situation when they may have misplaced their device.

The Google technology will be quite similar to Apple’s Find My network, which is often used to track a lost Apple device.

Every type of Apple device supports the strong Find My network, which is able to track iPhones, iPads, Macs, and even the newly released AirTag trackers. Google has their Find My Device feature for Android devices already.

The Find My Device network, coupled with the latest beta version of the Google Play Services update, will run this new feature. The latest feature will now allow Android phones to be found even if the misplaced phone is switched off. The previous Find My Device version could only find phones which are switched on and are connected to an active internet through either in-built mobile data or external Wi-Fi. 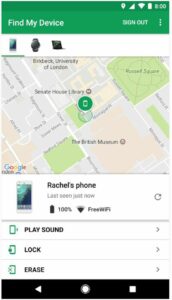 According to the latest Google Play Services beta update, there will be an option to join the network or opt out of it, as per your preference. There will also be something called Spot, which uses encryption and gets refreshed at specific time intervals. Android phones have always been more vulnerable to attacks compared to Apple devices and are notorious for poor privacy, but Google has recently been focusing much more on the privacy and experience of their users.

It is yet to be confirmed by the company what the new network will be able to track, and whether it only remains limited to the phones or if it can be extended to other kinds of devices. Google still has to officially release the update.

If Google can keep up with Apple’s Find My technology, it could be very helpful for Android phones that will be part of the network.

The internet giant is also working on expanding the Android Earthquake Alert system which will be made available globally later this year. The new Android Earthquake Alert system will use accelerometers on Android smartphones to detect seismic waves which are primarily used to indicate an earthquake. This means that if an Android phone detects any such kind of irregular motion, such as shaking or vibrations, it directly send a signal to Google’s earthquake detection server.