How to unlock Bozja 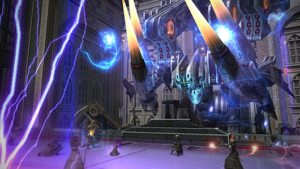 To access the Bozjan Southern Front, you must first fulfil a certain prerequisites. Catch up on the major storyline missions up to “Vows of Virtue, Deeds of Cruelty” at level 80. Then return to Rhalgr’s Reach and complete “The Bozja Incident” and “Fire in the Forge” to obtain access to Gangos, a new location that links to the Doman Enclave.

Make your way to Gangos and chat with Marsak (X:6.4, Y:5.7). When you complete the quest “Where Eagles Nest,” you will get access to the Bozjan Southern Front. When you’re ready to go inside, either alone or with a group, speak with Sjeros (X:5.5, Y:5.4) to enter the instance. Make care to talk to the NPCs in the neighbouring camp. They’ll begin a series of tutorial missions on how to engage in the Southern Front. These tasks also take you through the Resistance weapon questline.

Defeating the FATE-like Skirmishes scattered across the landscape will reward you Mettle, or Bozja-exclusive experience points, which will raise your Resistance rank. Skirmishes provide genuine experience points for levelling up regularly to anyone on a job beneath level 80. As you complete missions in the main camp, you’ll unlock additional parts of the map with higher-level Skirmishes.

The Bozjan Southern Front also contains unique Critical Engagements, which are more tough boss encounters with programmed elements, for players to challenge together. Anyone who does well in Critical Engagements gets the opportunity to participate in spectacular solo duels for fantastic rewards such as special mounts and titles. Finally, higher-level players can band together for Castrum Lacus Litore, a 48-man raid in which parties storm the stronghold to knock down many bosses.