How to unlock your Mac with an Apple Watch

Nowadays, you do not have to type in your Mac password or use Touch ID to open your computer. Instead, you can simply use your Apple Watch, which will automatically log you into your computer when the two devices are close to each other. Here is a guide on how you can enable this process.

Note that there are some requirements for this. Both devices must be supporting Auto Unlock to include the feature. Your Apple Watch must have watchOS 3 or later installed, and your Mac should have macOS Sierra or later installed. Also, it should only be one of the following devices:

Also, your Mac should have Wi-Fi and Bluetooth turned on, and both devices have to be signed in to iCloud by using the same Apple ID.

After you have fulfilled all of these requirements, follow the procedure given below: 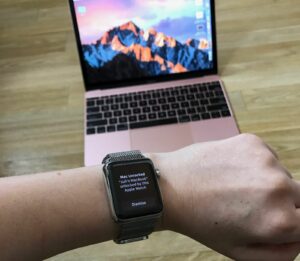 You can also use this function for other processes on your Mac that require the use of a password, such as unlocking a locked note, viewing passwords in Safari preferences, unlocking settings in ‘System Preferences,’ or approving an app installation.