How to use Shareplay on iOS 15 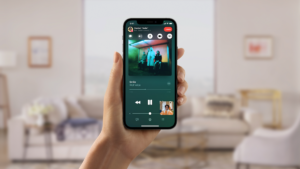 The new update is available for iPhone, iPad, Mac, and Apple Watch, and it includes some fantastic new features. FaceTime with non-Apple users, a Safari overhaul, quicker Siri, and the option to share your Health app are just a few of the highlights.

However, Apple’s new SharePlay function, which allows individuals to share their screen while on FaceTime, is the most intriguing of them all. Following the official release of iOS 15, many have expressed their dissatisfaction with SharePlay, which does not appear to be functioning properly.

Over the years, one of the most often requested iPhone and iPad features has been the ability to share your screen over FaceTime. People desire this functionality for a number of reasons, including tech assistance, playing games and puzzles together, and more.

At WWDC in June, Apple unveiled iOS 15, which was largely focused on SharePlay.  SharePlay also lets you to share the screen of your iPhone or iPad with others via FaceTime.

SharePlay is the fresh new feature for Apple customers that allows them to share activities while on a FaceTime conversation. Listening to music or watching movies is one example of this, as it allows both parties to see and hear the media. The playback will be synchronised automatically, which means that everyone will be viewing or listening at the same moment.

This is how SharePlay will function, but don’t get too excited just yet because the functionality isn’t currently live.

Because Apple established a SharePlay API for developers, SharePlay works with other popular applications and streaming services in addition to Apple Music and the Apple TV app.

Apple has also said it is working with certain partners, which include Disney+, Hulu, HBO Max, the NBA app, Twitch, TikTok, MasterClass, Zillow, Paramount+, ESPN+, and others.

After you and your friends have joined the watch party, open a compatible video streaming app like the TV app, Disney+, Hulu, or Paramount+, select a movie or show to watch together, and that’s all there is to it! Then everyone will be watching at the same time.

Spatial audio support, a Voice Isolation mode for suppressing background noise, a grid view for displaying all participants, and FaceTime connections, which may allow Android and PC users join your FaceTime chats for the first time, are just a few of the new features in the updated FaceTime app.