How to use TikTok’s text-to-speech voice

For a very long time, users on TikTok have been employing the text-to-speech voice to narrate their videos whenever they do not wish to talk.

The female voice has helped produce some of the funniest and most viral TikTok videos that the platform has ever seen, but recently, some things have changed.

Following an update to the app, the voice of the women has now changed, but the process of using text-to-speech has not. So, here is a guide on what you need to know. 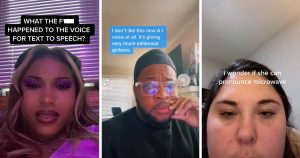 The process of getting text-to-speech on your post is relatively easy, and you do not have to go and use a separate or anything similar to it. All you need to do is record the video or make the post that you want to use it on, then add text to it prior to posting it live.

Once you have added some text over the top of your post, you can select the text box and then add the text-to-speech setting. After you do this, the video will start using the new text-to-speech voice and you can post it to the world. Thus, use the following procedure:

As mentioned previously in this article itself, when you use text-to-speech now, the voice that was instantly recognisable before has now been changed.

This is because of a lawsuit between ByteDance – the creators of TikTok – and professional voice actor who voiced this feature, Beverly Standing. Standing sued ByteDance in May of this year for using her voice in the text-to-speech setting without asking for her permission.

Her lawsuit against the company states that she was hired to do work in 2018 for the state-backed Chinese Institute of Acoustics research body so that her voice could be used in translations and that TikTok has used it without paying her, causing damage.

While it would be premature to decide whether or not the old voice will make a return telling if the original voice will return, the new voice is here and for now, it is quite simple to use.

You can learn more here on How to Change Your Username on TikTok.