Along with that, a lot of companies and industries make use of robots to carry out tasks which might put human workers in danger. Robots increase the efficiency of the work done and also make the work environment safer for other workers. With that being said, they are also utilized to carry out tasks that require machine like precision and handle miniature objects, which they are designed to do better than humans.

Robots are also used to explore the sea like and swim into the ocean to collect data and information about the life forms without trying to disturb or harm them. A team of researchers have now developed a soft robot that is capable of swimming in the Mariana Trench. This team of researchers is affiliated to multiple institutions in China. The details about this robot are published in the journal, Nature.

In the same journal, a News & Views piece has been published by Cecilia Laschi from the National University of Singapore and Marcello Calisti from the University of Lincoln, which outlines the work done by the team in China. 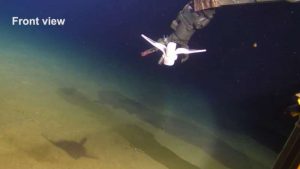 One of the major challenges when it comes to deep sea submarine craft is that the immense pressure is quite difficult to deal with. This problem has been faced by both manned crafts and those operated remotely. The hulls need to be designed and constructed in such a way that they can withstand the immense amount of pressure found in the deepest parts of the ocean. The entire process can prove to be quite expensive.

In order to address this issue, the team of researchers decided to imitate a soft fish. The researchers built their soft robot using soft polymers. The robot fish is capable of swimming by flapping its wings like a Ray. The wings of this robot are equipped with artificial muscle assembly. When an electric current is applied on these muscles, they contract and pull the wing up.

Another major but commonly faced challenge that the researchers had to face was to add electronics in order to control the robot. As a solution, the team decided to replicate the architecture of snailfish’s bones. The researchers spaced the electronics out and embedded them into silicone instead of packing them into a small packet.

The robot had been tested by the researchers first in the laboratory and then in a lake that was nearby and finally it was deployed in the South China Sea. The robot was proved to be successful in all conditions. Once this was confirmed, the team proceeded to hook the robot on to a traditional submersible and then deployed it into the Mariana Trench. The robot was successful in functioning there too.

The robot was mounted on a deep sea lander and was capable of reaching the bottom of the Mariana Trench and was still able to withstand all the pressure and was recorded flapping it’s fins.