How to watch the NBA finals

Following an exciting regular season and upset-filled postseason, Thursday brings to viewers the second game of the last series of the 2020-21 basketball year, as the Phoenix Suns play against the Milwaukee Bucks in the NBA Finals on ABC. 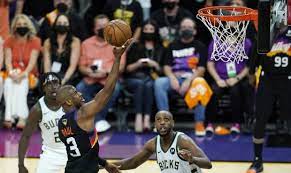 Because of the availability of a range of live TV streaming services, you will be required to have a cable subscription to watch this year’s Finals, which scheduled tonight for 6 p.m. PT (9 p.m. ET) on ABC.

With the exception of Sling TV, all the five major live TV streaming services offer ABC to viewers, but not every service will carry your local ABC station, so make sure to check whether or not it is available in your area. Meanwhile, Sling will be simulcasting the ABC games on ESPN3, so you will still be able to stream the games on its service.

The most complete and reliable option would probably be YouTube TV. However, if you want to get all the games for the cheapest rate, Sling TV is the ideal choice.

Since the games will all air on ABC, if you do not wish to use a streaming service you can simply order an antenna and watch the final game immediately.

Therefore, your options would be the following:

Since local COVID-19 restrictions have become a bit more relaxed, fans of both teams are allowed at playoff games this year, and both the Bucks and the Suns will welcome near-capacity crowds for the Finals.