On Wednesday, September 15, SpaceX’s Inspiration4 mission is set to fly into Earth orbit, and you can witness the historic launch live. 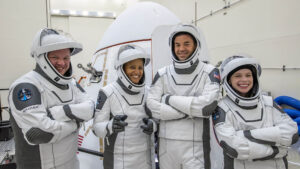 The launch livestream will begin at 3:45 p.m. EDT (1945 GMT) on SpaceX’s YouTube account and will also be available on Space.com, courtesy of SpaceX. At 8:02 p.m. EDT, NASA’s Kennedy Space Center in Florida opens a five-hour launch window (0002 GMT on Thursday, Sept. 16).

In case you missed it, SpaceX conducted a news conference on Tuesday where you could virtually hear from the four crew members of Inspiration4, the first all-civilian journey to Earth orbit. SpaceX’s YouTube channel broadcasted the event.

Inspiration4 officials noted in a recent press release that if the launch is delayed for any reason, a backup chance would open at 8:05 p.m. EDT on Thursday (Sept. 16; 0005 GMT on Friday, Sept. 17). The weather report for Wednesday’s prime launch window is now 70% favourable.

Inspiration4 officials noted in a recent press release that if the launch is delayed for any reason, a backup chance would open at 8:05 p.m. EDT on Thursday (Sept. 16; 0005 GMT on Friday, Sept. 17). The weather report for Wednesday’s prime launch window is now 70% favourable.

A Martin Guitar ukulele that Sembroski will play in orbit, as well as a never-before-released rendition of “Time in Disguise,” a song by Grammy Award-winning rock band Kings of Leon, will be included in the SpaceX Crew Dragon capsule launching Wednesday.

The performance is going into orbit as a non-fungible token (NFT), that is a digital item that can be sold on some marketplaces. The crew also intends to fly 50 art NFTs created by 50 different artists, as well as a variety of other space-related items.

People who are not really professional astronauts have orbited our planet before, aboard NASA’s space shuttle, Russian Soyuz spacecraft, Russia’s Mir space station as well as the International Space Station (ISS). In reality, current NASA Administrator Bill Nelson was a member of the United States House of Representatives when he flew on the shuttle Columbia’s STS-61-C mission in January 1986.

Those amateurs, on the other hand, were all accompanied by professionals — NASA astronauts or Russian cosmonauts who had gone through a rigorous selection procedure and were then regularly prepared for spaceflight as part of their jobs. On Inspiration4, there will be no such guardrails.