Hydrogen Economy – A Future Where Hydrogen Is The Energy Currency 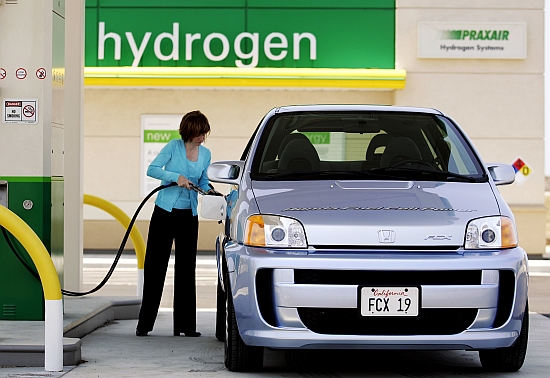 Energy is one of the most important human needs in the contemporary world. Energy is today traded in the form of either fuel or electricity. But millions of households in Asia, Africa and Latin America still don’t have access to it. This is partly due to the unavailability or the inability to afford sufficient quantities of the requisite fuel, lack of finance for setting up the requisite infrastructure for generation, transmission and distribution of electricity and a combination of many other factors.

When we venture into the renewables, the lack of fuel is overcome like either in solar, wind or biomass depending on the local conditions. The next important step is to store and transport the energy. Primary method to store energy is storing it in batteries. But batteries have their own set of disadvantages such as bulkiness, maintenance requirements, lifetime and charge-discharge losses. The other promising method for storing and transporting energy is Hydrogen.

Energy will be stored or traded in the form of hydrogen, rather than as electricity. Electrical energy produced from renewable sources such as solar or wind power can be used to generate hydrogen which can be stored and transported for later usage. Electricity is harnessed from Hydrogen by using a fuel cell. This whole system is referred to as Hydrogen Economy where hydrogen is the energy currency. This system can make a whole country energy independent and reduce its carbon emissions to a great extent.

Hydrogen, as we know is a very simple and light element. It is very abundant in nature and exists by forming bonds with other elements rather than in its free state. Hydrogen has the highest mass energy density which translates to more energy per unit mass when compared to any other fuel.

Currently, hydrogen is majorly produced from coal or natural gas which is the most economical option. Technologies are being developed to produce hydrogen from biomass and biofuels which are renewable resources. One of the most expensive but still promising methods of hydrogen production is water electrolysis. In this process, electricity is passed through brine (salt) solution which generates hydrogen and oxygen at two different electrodes.

But if this electricity is going to be produced from renewable sources where fuel is free of cost, electrolysis can become economically feasible. Scientists and researchers are also working on photo-electrolysis in which sunlight activates solar cells to split water in order to produce hydrogen. This technology has been coined the term ‘Artificial Leaf’.

Hydrogen has a very high energy content by weight (about 3 times more than gasoline), but it has a very low energy content by volume (liquid hydrogen is about 4 times less than gasoline). This makes hydrogen a real challenge to store. One of the important applications of hydrogen was to use it as a fuel in automobiles. Hence, to compete with the conventional automobiles, we need user-friendly and reliable hydrogen storage systems for on-board storage.

The nuclear fusion process is nothing but joining two hydrogen atoms to form Helium atom and release a huge amount of energy. Hydrogen has been in usage used to fuel rockets and missiles. At the domestic level, the most promising technology is fuel cells. Fuel cells are similar to batteries having two electrodes and an electrolyte. Hydrogen passes through the system in order to generate electricity and water. Unlike combustion, this process does not result in any pollution or carbon emission. Fuel cells can be used to power our vehicles, our homes, our offices, our workshops or any small system.

The viability part of Hydrogen economy depends on various factors like where will hydrogen be generated and where it will be used up. We can have hydrogen production facility and fuel cell at the same place or alternatively generate at one place, transport it and use it elsewhere. The Ministry of New and Renewable Energy has envisioned National Hydrogen Energy Road Map in 2003 in order to bridge the technological gaps in areas of renewable energy. Very soon hydrogen is going to be the means of energy.