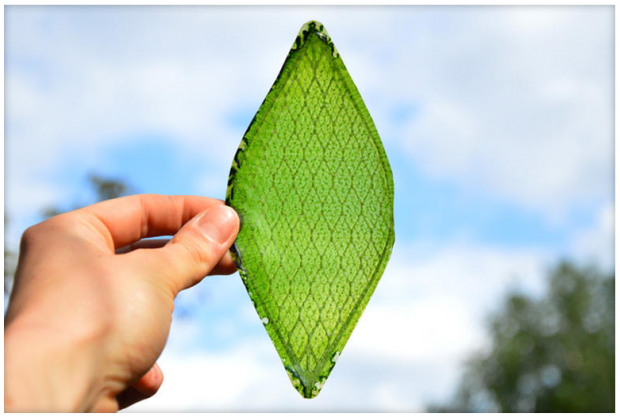 The Artificial Leaf That Converts Carbon Dioxide To Fuel

Sun is the ultimate source of all forms of energy. Solar energy is converted from one form to another and it ultimately reaches millions of living beings in various forms on earth. The most important and the major conversion is the one that takes place naturally in the plants, the photosynthesis. As we all know from our school days, photosynthesis is the process of production of carbohydrates and oxygen from carbon dioxide and water in the presence of sunlight taking place in the green leaf. The energy in the form of sunlight is converted into bonds between atoms and molecule in carbohydrates. What if we could mimic this process to that could generate a fuel when sunlight is incident on it?

An artificial leaf does the very same thing. An artificial leaf is a device that uses the incident solar energy to produce a fuel that can be further used to meet our energy needs. Artificial leaf technology are predominantly of two types. In the first one, it is used to split water to generate hydrogen. In the other, it reduces carbon dioxide to produce carbon monoxide which can later be converted to useful fuel.

The future energy story is all about hydrogen. Hydrogen economy is the proposed system of delivering energy using hydrogen.It involves hydrogen production, storage, transportation and generation of electricity using fuel cells. Hydrogen production, today is mainly either from the burning of fossil fuels or electrolysis of water. These methods are unsustainable, inefficient and economically not feasible. The artificial leaf is a sustainable solution.

California Institute of Technology(Caltech) have developed an artificial leaf which consists of two electrodes separated by a membrane. The photoanode is made of gallium arsenide, which is an excellent light absorber. Its coated with a layer of titanium dioxide which helps keep the photoanode stable and protected. It also has a layer of nickel on top of it which acts as a catalyst. When exposed to sunlight, the photoanode oxidizes water molecules, generating oxygen (O2) as well as protons and electrons, which pass through the membrane and are recombined by the photocathode into hydrogen (H2).

Larry Curtiss and his team at the U.S. Department of Energy’s Argonne National Laboratory and the University of Illinois at Chicago have developed an artificial leaf that converts carbon dioxide into carbon monoxide using a catalyst.

The process consists of three steps. In the first step, photons – the packets of light from the sun are converted into negatively charged electrons and positively charged holes. In the second step, holes react with water molecules to produce protons and oxygen molecules. In the third step, the protons, electrons and carbon dioxide all react to form carbon monoxide.

Similar Read: Do You Know About The Water Fuelled Car Made In India?

The first major challenge that they encountered while developing the leaf was that carbon dioxide is relatively chemically unreactive. In plants, it reacts in the presence of an enzyme. The scientists then developed a catalyst, a metal compound called tungsten diselenide, which they fabricated into nano-sized flakes to increase the surface area and to expose its reactive edges. The second challenge was the product itself, the carbon monoxide . It is a poisonous gas as well as a much more potent greenhouse gas than carbon dioxide. Then they found a way to convert it into methanol.

Artificial leaves are going to revolutionize the way we are generating energy. Hydrogen or hydrocarbon fuel can be stored easily when compared to electricity in batteries. For instance, if we take an electric scooter, it would be easier to refuel hydrogen and then use the fuel cell, rather than sitting ideally when your battery is charging for a longer time. Hydrocarbon fuel can be directly used in vehicles or furnaces with just slight modifications to it. Hence there is no need to convert to electricity based devices for sustainability.