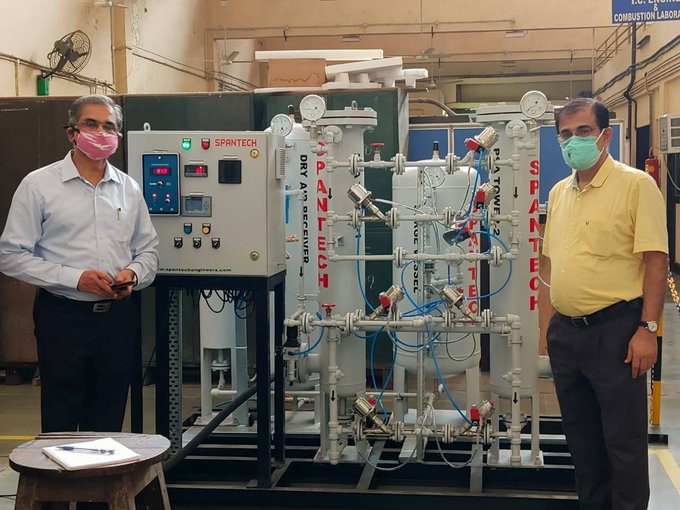 The second wave of Covid-19 has shown India some terrible images.  The situation is seen getting worse with every passing day. The new mutation of the virus causes oxygen problems. Even the vaccination did not help controlling the amount of rapid spread of the virus in the country.

Many problems are being faced by India and its healthcare sector. There has been a lot of shortage for oxygen tanks, oxygen concentrators, BiPAP machines and other medical equipment.

Many companies like Amazon and Mahindra Group have helped a great deal to increase the availability of oxygen in India.

Yet another name that joins this list of helping to increase the availability of medical oxygen is IIT Bombay.

The Indian Institute of Technology (IIT) Bombay generated a device for the production of Oxygen. This is done by converting the Nitrogen generator to an Oxygen generator. This project is led by Professor Milind Atrey of IIT-Bombay. This experiment was successful and gave out positive results. For this project to work, the conversion of PSA (Pressure Swing Adsorption) Nitrogen Unit to PSA Oxygen Unit has to be done. Preliminary tests done at IIT Bombay have shown promising results too.

Oxygen produced at the plants have an atmospheric pressure of 3.5, with a purity level of 93% – 96%. The produced oxygen can be utilized for COVID-related needs in hospitals and at other COVID-19 facilities by providing a continuous supply of oxygen.

Professor Milind Atrey, Dean (R&D), IIT Bombay, who led the project said that- “How can the nitrogen unit be converted into an oxygen unit? It has been done by fine-tuning the existing Nitrogen Plant setup and changing the molecular sieves from Carbon to Zeolite. Such nitrogen plants, which take air from the atmosphere as raw material, are available in various industrial plants across India. Therefore, each of them could potentially be converted into an oxygen generator, thus helping us tide over the current public health emergency”