Autonomous driving refers to vehicles that are able to drive themselves without any human intervention. Such vehicles are capable of sensing their environment and move accordingly. These vehicles function without little to no human input. Driverless vehicles are equipped with a number of sensors in order to sense their surroundings.

Companies all over the world are now trying their hands at autonomous vehicles. One such company is Baidu, which is a Chinese tech giant. Recently this company rolled out its paid driverless taxi services in Beijing, China. So far, it is the first company to commercialise the process of autonomous driving in China.

The company Baidu, is primarily known for its search engines. The company has been testing autonomous driving since last year. The company has rolled out around 10 Apollo ‘robotaxis’. Each ride in these robotaxis costs around 30 yuan which is equivalent to $4.60.

Mr Wang who is currently serving as the Vice President and General Manager of autonomous driving technology at Baidu. He said that, “In the future, Baidu Apollo will launch driverless robotaxis in more cities, enabling the public to access greener, low carbon and convenient travel services, while continuing to improve the unmanned service process and user experience.”

This is the first time the company is rolling out a completely autonomous vehicle. All the previous autonomous driving demonstrations by Baidu featured a safety driver sitting behind the wheel. But in this case, a safety driver was seated in the passenger seat in case of any emergency. 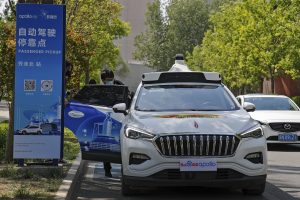 The robotaxis are designed to forcefully apply a break whenever jaywalkers or curious tourists walk up to the vehicle in order to click pictures.

Autonomous Vehicles are considered to be beneficial for those who are not able to drive due to various circumstances such as old age or disability. With the help of autonomous driving, travel could be made convenient for these people and it would also reduce their dependence on others.

The autonomous vehicles are equipped with ACC. ACC stands for Adaptive Cruise Control. This system allows the vehicles to adjust their speed automatically to ensure that a safe distance is maintained in between the car and the vehicle in front of it.

Due to their ability to drive with precision, there are few chances that an automated car will endanger human life. Such cars are extremely useful to avoid driving fatigue especially when it comes to overnight journeys.

One of the visitors, Amy Li said, “We’ve all had experiences such as other cars jumping the queue or making a sudden lane change. People have emotions while robots don’t, at least at present. The robots may not be able to deal with such changes.”

Interested passengers can now avail the services of robotaxi on an app called Apollo Go. Once the taxi arrives to pick up the passengers they are required to verify identity before getting into the taxi. The taxi only starts to move after it detects that the customers have fastened their seat belts.