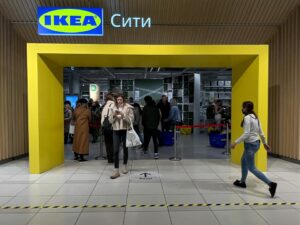 The Dutch-headquartered Swedish multinational furniture conglomerate, IKEA, has planned to open its sale for the last time in Russia on July 5, allowing consumers to purchase products in a fire sale which will be available only on its online platform. The multinational conglomerate earlier announced that it will close all its services in the Russian furniture industry for an indefinite period, however, it wishes to make a come back someday in the future.

The company through its site in Russia declared that from Tuesday residents of Russia can purchase the products under IKEA for the next few weeks via its online site. It further said that the commodities will be on sale until they are available in reserve.

As per reports, people were not able to add the goods to the cart till 12:30 p.m. in Moscow.

After which the Company released a public statement saying that due to technical issues receiving orders via the cart on its online store is not available for a limited time. And subsequently removed a statement it posted before it that read the firm is dealing manually with the orders it has got, at the moment.

Putting a large amount of stock on sale and earning capital through it in Raise might give rise to a number of questions because of the public and political pressure on the firm to discontinue its operations in the country.

The Swedish conglomerate has 14 stores at work in Russia currently under a brand called MEGA, although it claimed that it has been looking for options for its 17 furniture shops in the country which are winding down at present.

After Russia invaded Ukraine and initiated a war earlier this year a number of conglomerates have decided to wind down their services in the country.

Withal, less than 40 companies comprising McDonald’s, Renault, etc. have declared their proposals to auction their services in Russia or hand it over to domestic players.

The Swedish conglomerate in the previous month declared that it will put its industries for sale, wind down the workplace, and lower its employee’s number from 15,000 in Russia as it did not speculate to make a comeback in the country in the near future.

The parent company of IKEA, Ingka Group said in the last month that it is ready to make a comeback in the country someday, but that situations were not favorable currently.

The company also announced that it would keep paying salaries to all its employees till August.