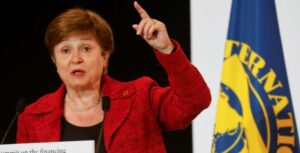 On Wednesday, July 6, International Monetary Fund chief stated that since April, the outlook for the global economy had thus ‘darkened significantly.’ Additionally, she stated that the possibility of global recession in 2023 could not be ruled out yet owing to the visibly increased risk.

Kristalina Georgieva, the Managing Director of IMF stated how the fund is expected to downgrade in the next few weeks its forecast for this year which was 3.6% global economic growth. She added how this would be the third downgrade this year, further stating that the IMF economists are yet to finalise the new figures. Later this month, they are set to release the updated forecast for both 2022 and 2023, following it slashing the forecast by almost an entire percentage point. Last year, the global economy saw an expansion of 6.1%.

In an interview this week, Georgieva stated how the ‘outlook had darkened significantly’ since IMF’s last update about two months ago. At the time, she was citing a more universal expansion of inflation, and hikes in interest rate. Along with it, a slowdown in the economic growth in China, and rising sanctions linked to the Russian invasion of Ukraine.

“We are in very choppy waters,” she said. Asked if she could rule out a global recession, she said, “The risk has gone up so we cannot rule it out.”

According to latest economic data, Georgieva pointed out, large economics such as Russia and China had visibly contracted in these second quarters. Specifying increased risks, she mentioned both 2022 and 2023 is set to get tougher, with risks of recession next year.

An essential part of the US Treasury yield curve inverted on July 6 for a second straight day is clearly an indication of the incoming recession. Owing to this, investors are evidently getting more and more concerned. In June, Federal Reserve Chair Jerome Powell stated how the US central bank was not attempting to engineer recession. However, he added, it was devoted to getting prices under control despite it risking economic downturn.

The IMF chief further showed how an even persisting tightening of financial conditions would cause complications in the outlook, however it is important to control the rising prices. Moreover, she added how the outlook was currently more heterogenous than in 2020. While importers struggle, energy exporters such as the US are on an improved footing. According to her, the crucial need for restoration of price stability unfortunately requires a slowed economic growth.

Additionally, she cited an increased divergence risk among fiscal and monetary policies. Further, she pushed nation to cautiously calibrate the step to avoid any occurrence of central bankers’ effort to control inflation getting undermined by fiscal support.

“We need to create the same strong level of coordination between central banks and finance ministries so they provide support in a very targeted way … and don’t weaken what monetary policies are aiming to achieve,”