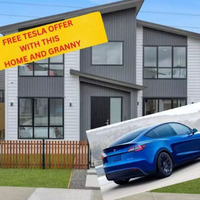 In order to stand out from the competition, a homeowner is offering a free Tesla car with the sale of a $1.8 million house

The house owner has acted smartly by adding a complimentary Tesla electric car worth $60,000 to their home purchase. But unfortunately, a homeowner is trying to hasten the selling of their property.

By including the unusual offer of a free automobile, the seller of the house in Auckland, New Zealand, who prefers to remain anonymous, hopes to overcome market obstacles to selling their seven-bed property, listed at $1.8 million.

The news panel was informed that the five-bedroom house also has a two-bedroom “granny flat.” Moreover, off-street parking for up to six cars needed something unique to attract buyers.

According to Sky News, the Tesla Model Y will be bought. Additionally, it was dispatched by the factory after the new owner selected a color from five selections.

The Telsa was added to the deal because, according to estate agent Prince Kapoor of Barfoot & Thomspon estate agents, the buyers “wanted to be different” because the house was similar to many others in the neighborhood.

According to sources, the New Zealand housing market is in a recession. According to Sky News, house prices have dropped for 11 straight months and by the most in 30 years in October.

The primary reason we came up with this notion, according to Kapoor, is because the Auckland market has declined by 10% or more. As a result, buyers are more reluctant to purchase because they believe the market will reduce further.

We wanted to use this Tesla offer to add some optimism. Because everything else is terrible, and so far, we have received a tonne of queries.

According to Barfoot & Thompson’s website, the house is situated on 1,561 ft² of land and is located in a suburban area of Auckland. 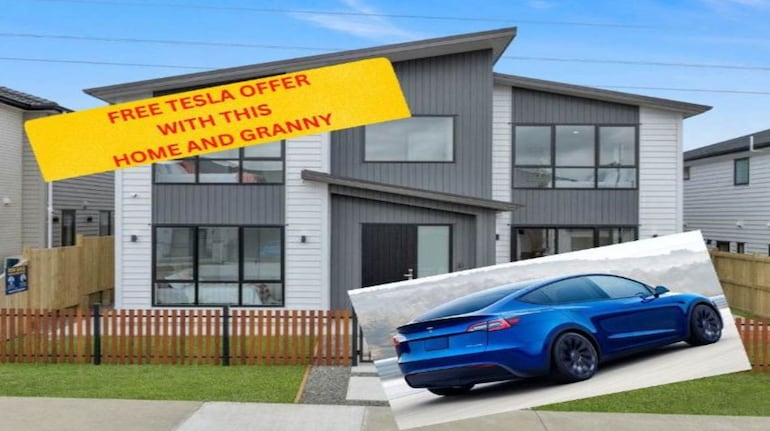 For the eleventh consecutive month, New Zealand house prices fell 10.9% in October, the most significant monthly decline in 30 years.

Due to the 400+ other listings in the Auckland neighborhood. The owners of 22 Dungloe Avenue, Flat Bush, had to lower their prices and take additional steps to stand out. Kapil Rana, a residential sales agent with Barfoot & Thompson, spoke to Stuff.co.nz.

He continued, saying that the car’s price is a “bonus” rather than increasing its market value.

The Tesla Model Y comes in five colors. Additionally, after the property is purchased, the new owner can choose which one they want. The car will then be ordered and transported directly from the manufacturer.

Before peaking in November of last year at levels consistently referred to by the central bank as unsustainable, housing prices in New Zealand increased by about 40% during the pandemic. After that, prices dropped significantly due to the central bank’s aggressive hikes in the cash rate and mortgage rates.

Many experts believe that even though the cash rate is predicted to increase, housing prices will continue to decline.