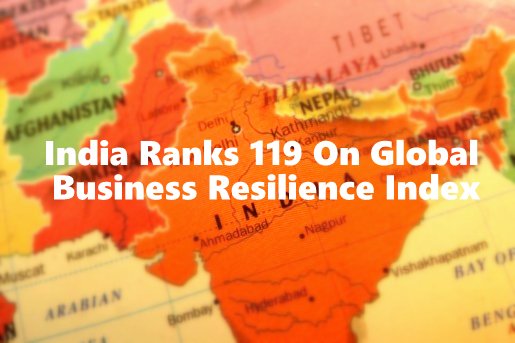 New York, April 2: India has been ranked a low 119 out of 130 countries on an index that measures business resilience of nations based on economic, risk quality and supply chain factors, dropping seven notches from last year.

The 2015 FM Global Resilience Index has been topped by Norway for being the country best suited for companies seeking to avoid disruptions in their global supply chain operations.

Venezuela is ranked last on the list. India, „despite its scope and global potential”, ranks 119, falling from 112th rank in 2014.

On the economic parameter, which takes into account GDP, political risk and oil intensity, India is ranked 115, the same as last year.

In the risk quality factor, India is ranked 109 for its quality of natural hazard and fire risk management, a slight improvement from its 113th rank in 2014.

In the third category of supply chain, which looks at corruption control, infrastructure and local supplier quality, India is ranked 89th, falling 11 spots from the previous year.

„Economically, (India) suffers from a formidable tangle of problems. A third of its population still live in extreme poverty — one of the highest incidences outside sub-Saharan Africa. The implementation of economic reforms has been identified as a priority by India’s new government,” the report said adding that India ranks poorly across eight of the nine drivers of resilience.

„The exception is the country’s relatively low exposure to natural hazards, which suggests that India’s destiny, to an encouraging extent, lies in its own hands,” it said.

At the 123rd spot, Pakistan is in the bottom 10 countries on the index.

Ukraine fell 31 places in this year’s index to 107th, the biggest year-over-year fall in the rankings, owing directly to Russian military intervention there.

This worsening political risk and a weakened infrastructure are the main negative factors affecting the rank of Europe’s largest country, the report said.