On September 15, 2021, SpaceX’s Inspiration 4 crew launched into orbit, claiming to be the world’s first all-civilian mission. The cargo also featured the first-ever NFT-based song to be played in space. Thus this isn’t the mission’s only first-ever record. St. Jude Children’s Research Hospital, Kings of Leon, and Inspiration4 collaborated to create the song. 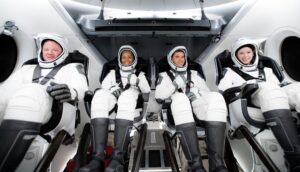 A live performance of the song Time in Disguise is paired with graphics developed specifically for the NFT-based song’s live recording on the non-fungible or unique digital token. The song became the first “minted music NFT to be played in space” when it was performed in space.

The Inspiration 4 crew performed music in space, and a song based on NFT will be offered online.

The highest bid for the NFT of Time in Disguise ky Kings of Leon, Live on Tour is $50,000 as of 04:00 PM IST on September 20, 2021. According to the information supplied in the tweet’s link, “The buyer will receive the iPhone 12 that was used by the Inspiration4 crew to play the NFT in space. The buyer will also have the opportunity to meet the Inspiration4 crew as well as the Kings of Leon. Travel and lodging are covered. Bidding will begin on September 9, 2021. And will end on September 20, 2021.” In addition, the tweet illustrated how music sounds in space.

St Jude Children’s Research Hospital asks viewers in the tweet shown above if they know what music sounds like in space. The tweet also tells viewers how the Inspiration 4 team discovered the sound of music in space. And how a bidder can win the NFT and hear the tune for themselves. Finally, the tweet says that bidding for the NFT will end soon. And includes a link to the website where interested viewers can bid on the NFT-based music.

“Commander (Inspiration 4) Jared Isaacman chose St. Jude Children’s Research Hospital as its beneficiary. And has committed $100 million to inspire others to raise an additional $100 million to accelerate research on devastating childhood diseases and save children all over the world,” according to the bidding website. The Falcon 9 rocket launched the astronauts into space from NASA’s historic Kennedy Space Center in Florida. All of the crew members have safely returned to shore.