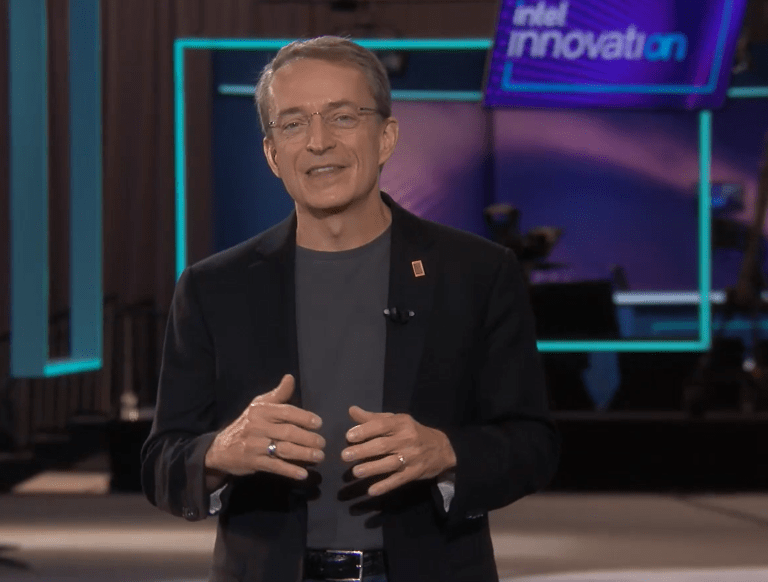 “Moore’s law is alive and well,” Gelsinger said at the company’s online Innovation event. “Today we are predicting that we will maintain or even go faster than Moore’s law for the next decade. … We as the stewards of Moore’s Law will be relentless in our path to innovate.”

That’s a bold assertion from a company that has struggled to progress its chip manufacturing over the last half-decade or more, and has lost market share to Taiwan Semiconductor Manufacturing Co. and Samsung, the two other top chipmakers.

It shows that Intel is willing to fight to restore its position and breathe fresh life into a stagnant chip market.

Moore’s Law is named after Gordon Moore, who observed in 1965 (and somewhat modified in 1975) that the number of transistors on a computer processor doubles every two years.

It’s not a physical law, but rather a reflection of the economics of miniaturisation: as manufacturing improves, more circuitry can be put onto a chip, increasing its power and supporting the next round of breakthroughs. 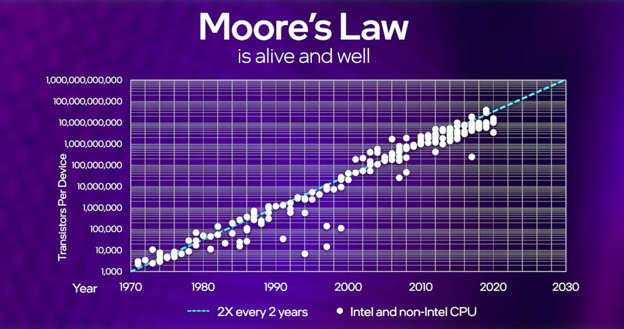 However, as research and production become more expensive, miniaturisation has stalled. Chip elements are shrinking to atomic scales, and power consumption issues are limiting the clock speeds needed to keep chip processing steps in sync.

As a result, Moore’s Law is now commonly used to describe improvements in performance and power consumption, as well as the capacity to pack more transistors into a smaller space on a chip.

Gelsinger, on the other hand, was referring to the traditional meaning of a processor’s transistor count — albeit a processor that could be made up of numerous slices of silicon packed into a single container. He stated, “We expect to bend the curve faster than a doubling every two years.”

Intel will simply catch up to competitors if it succeeds, which Gelsinger promises will happen in 2024. Intel struggled to transition from their 14-nanometer to a 10-nanometer production process, while TSMC and Samsung made faster progress.

Along with packaging, Gelsinger mentioned two important breakthroughs that he believes would help Intel restore its position as the market leader. The first is RibbonFET, which is also known as GAA (gate all around).

It changes transistors such that current flows via a stack of thin ribbon-shaped semiconductors completely encircled by the gate material that turns on and off the current.

The second is Intel’s PowerVia, or backside power delivery as it is more commonly known. This means transistors consume electrical power from one side while connecting to data transmission lines on the other, which adds new processing stages to chipmaking.

Today’s chips strive to fit both functions onto one side, increasing complexity and reducing the number of functions available.