Intel Corporation, an American multinational corporation and technology company headquartered in Seattle, is planning to invest $3.5 billion to modernise a new facility in Rio Rancho, New Mexico. The announcement was made on Monday. The aim is to increase the manufacturing capacity for its next-generation advanced semiconductor technology research and manufacturing. This decision will provide a large degree of new momentum to the New Mexico production facility, while also raising hopes about the state’s economic condition.

This latest round of investment is more than the $1 billion-plus Facebook has given to its Los Lunas data center since 2016. Michelle Lujan Grisham, the Governor of New Mexico, has referred to Intel’s commitment as the greatest investment by a single company in the state. 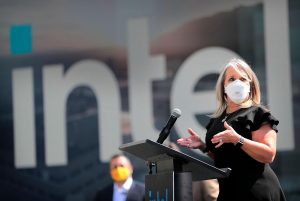 Lujan Grisham, along with US Senators Ben Ray Luján and Martin Heinrich and US Representative Teresa Leger Fernández were among the guests when the announcement was made. This indicates simply how much impact a newly invigorated Intel plant could have on the economy of New Mexico, which is primarily dependent on the output and income generated from the oil and gas industry.

Intel’s Rio Rancho plant, which had been a significant chipmaker within the company’s portfolio until a few years ago, has been in existence since 1980. The plant’s mission is now described by officials as being the company’s hub of innovation. While it has always been an important part of Intel’s global activities, it has become even more critical to the company’s success.

The plan for modernisation covers three years, and will involve transforming the plant from a central processing unit and traditional semiconductor manufacturer to an advanced semiconductor technology manufacturer. Another idea that Intel is currently in the process of pioneering is stacking semiconductor tiles on top of each other rather than side by side. This will save space and capacity in material components, such as cellphones and personal computers.

While there are currently 1800 jobs at the Rio Rancho facility, Intel announced that over the course of the next three years, 700 more openings will be added. If metrics for employment are met, the state Economic Development Department is investing $5 million in Local Economic Development Act funds to the project. If specific job goal requirements are met, Sandoval County pledged to invest $500,000. Rio Rancho plans to put in an additional $250,000. The gross receipts tax revenue generated by the construction is expected to be $28 million, with Intel being allowed to keep $14 million.

During the past two years, employment dropped from more than 5,000 in the first half of the 2000s to 1,100 in 2017 and 2018. The cause of this was that central processing unit manufacturing was considered obsolete and Intel transitioned into advanced semiconductor technology. The modernisation process will essentially enable Intel to install its Foveros 3D chip-stacking technology – which was introduced in 2019 – and enhance the technology that has been in use since 2017 to simplify and optimise semiconductor packaging, memory, and connectivity.