Science has proved that there is no limit to what one can achieve with technology. Robotics is one such example. In today’s world robots are present at almost every job making it easier for the humans to carry out their day to day activities. Robots are also utilised to carry out jobs which might be too risky for humans or just too tough and tedious.

Beauty industry is not unfamiliar with robots. Panasonic, a tech giant company developed a robot for self care purposes back in 2011. This robot could wash, massage and even blow dry hair. It was mainly designed for the elderly, the caregivers and those suffering from limited mobility.

Following on the same lines, scientists from MIT’s Computer Science and Artificial Intelligence Laboratory (CSAIL) along with the Soft Math Lab at Harvard University have developed a robot which can take care of users’ hair. This robotics arm is equipped with a soft brush containing a sensor. The robot makes use of a camera in order to see and assess the texture and curliness of its user’s hair. The system then lets out a complete brush out experience.

Josie Hughes who is a postdoc at CSAIL said, “By developing a model of tangled fibers, we understand from a model-based perspective how hairs must be entangled: starting from the bottom and slowly working the way up to prevent ‘jamming’ of the fibers.”

Hughes further adds that, “This is something everyone who has brushed hair has learned from experience, but is now something we can demonstrate through a model, and use to inform a robot.”

The robotic arm contains a soft bristled sensorised brush, it measures the forces applied during brushing. These are then combined with a set up called a ‘closed loop control system’. This set up collects the feedback derived from the output. Based on this it is capable of performing the action automatically without any human intervention.

This in turn creates a ‘force feedback’ from the brush. This is a control method which allows the user to feel what the brush is doing. This was very vital as every head of hair is different. While brushing if the robot messes up it leads to more entanglement of hair. If an incorrect brushing technique is used, it might lead to knots and pain while brushing and can seriously damage the scalp. 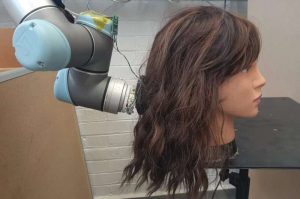 Josie Hughes said, “To allow robots to extend their task solving abilities to more complex tasks such as hairbrushing, we need not only novel safe hardware, but also an understanding of the complex behavior of the soft hair and tangled fibers.” Hughes further added that, “In addition to hair brushing, the insights provided by our approach could be applied to brushing of fibers for textiles, or animal fibers.”

The ‘RoboWig’, was put to test several times and was tested on wigs of various textures. It had to brush wigs ranging from straight to very curly hair.

With the Corona virus wreaking havoc all over the world the healthcare workers are exhausted and overworked. The nurses who are usually responsible for the patients spend a total of 18 to 40 per cent of their time carrying out the direct patient care tasks. They must perform these on many patients with a little time at hand. Personal care robots can prove to be of great help and can also save up a lot of time.