The technology has developed tremendously in the last few years. We have shifted from flip phones to touch screen in the last decade. But that didn’t stop the research and development to update the way we communicate. There were various developments made in the phones to incorporate more and more features. With the help of intelligent sensors we can now connect phones to each other without wires.

The concept of Internet of Things (IoT) is on the rise with most of our devices being connected to the internet. However as we depend more and more on it, it also consumes a lot of power. This could turn out to be a major issue. In order to tackle this, ‘Fraunhofers ZEPOWELL lighthouse project’ has come up with a solution. They were able to come up with a hardware that enables the sensors to be energy efficient and along with that makes them capable of saving energy.

Eric Jung, project team leader says, “The sensor node hardware that we have developed in the project sets itself apart because it can be constructed modularly from various building blocks, allowing it to be adapted to a range of applications.”

Sensors are used for a whole lot of purposes worldwide such as protecting home from intruders or to keep an eye on the machines in a factory. The sensors are predominantly used for controlling and monitoring purposes. And their use for this purpose is on the rise. The Fraunhofers ZEPOWELL lighthouse project has come up with a microcontroller which are capable of analyzing the situation and issuing a signal via a wireless unit and receive instructions. The Fraunhofers ZEPOWELL lighthouse project is planning to introduce two products this year. These two products are capable to tackle the problem of energy consumption from a different perspective.

One of the products is a self sufficient sensor. It is equipped with a node which is capable of supplying itself with energy and also collects environmental data. The second one reduces energy consumption. It too has a sensor node which has been fit inside. This sensor node records the data such as operating state of machines, motors or pumps and helps it to reduce their energy consumption. The self sufficient sensor is also equipped with what is known as the ‘smart city node’. What is means is that, the sensor is capable of falling into a high energy saving deep sleep mode when it is not required to function.

The self sufficient sensor, when put into a smart city node consumes just a few nanowatts. The Fraunhofers ZEPOWELL lighthouse project is planning on utilizing this technology for the cars and buses and plans on getting it installed in the next few months. Upon further development such sensors are also capable of being deployed in agricultural applications as such sensor based precision farming is on the rise. 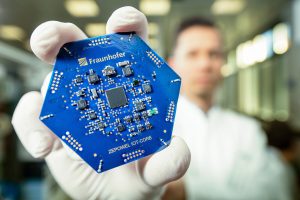