“iPhone 13” unleashes a flurry of memes and responses on Twitter

After a torrent of excited speculations and guesswork, the much-awaited Apple event quenched the curious anticipation with the release of the iPhone 13 that has further added to the excitement. Following the launch, Twitter has been bearing witness to the echoes of excitement that have manifested themselves in the form of hilarious memes and responses which is quite typical of the Twitter town. Looks like the users are quite intrigued by the new star in town and it is well reflected in the reactions and responses that have been filling every bit of Twitter. The chain of products launched was quite good at their game of intrigue that users are in a dilemma as to which product to go for. It is a life-altering decision after all and the opportunity cost must be worth it. 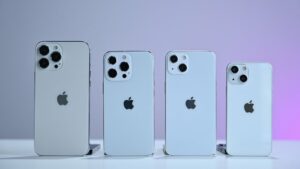 The four new iPhone models launched were successful in flooring the already charged audience completely that excitement prior to the launch was quite justified. The new models with their advanced features are definitely a step ahead of the old ones that there is no doubt that they were in the spotlight throughout the course of the event. Particularly the display and clarity have added to the overall intrigue as Apple is taking the first step to adding the “ProMotion” technology in their displays. As exciting as that sounds, coming out of the Apple niche, it must be noted that several of the Android phones have boasted of this feature for years. However, the major point of attraction of the new models is the camera. The 12MP wide-angle lens complete with a sensor on the iPhone 13 and iPhone 13 mini is not a small deal.

Since the event was exciting and as it lived up to the hopes of all those who were eagerly waiting for it, it is only natural that Twitter took up the case with equal fervor and craze. Let us take a look at the reflections of this excitement on Twitter, most of them in the form of hilarious memes.

The excitement in a capsule.

Now that the iPhone 13 is out… pic.twitter.com/BVgN7FAkvU

Seems like this time they actually stayed true to their words.

Apple says it every year, but the iPhone 13 cameras do seem much improved https://t.co/49q61GBmbB pic.twitter.com/HRaAH1amWd

The question here is rather simple. Why would he want to take it in his mouth? Perhaps to get a taste of it. Talk about bad jokes.

Me leaving the Apple store with an IPhone 13 in my mouth: pic.twitter.com/kfWRCaFUFk

Why is Apple and snobbery always tied together?

The same old meme that surfaces every time Apple launches something.

Your parents when you try to explain to them the differences between iPhone 12 and iPhone 13: #Apple pic.twitter.com/3V1iTI4fyu

And here are some good exercises for the brain and eyes.