ITS FUNDING FOR KOO

Social media has a huge influence on our lives; that is the reason a country like India which has so many youngsters prefers to exercise their right to speech through it.

In totality the population of many countries are not even possible to compete the figure of population that is hooked on social media in our country. It is mode to express opinion, rage & excitement in daily course of life. There are a list of applications that have been developed and are also very popular in this domain. But; all of them are pre-dominantly not developed in India or are not created by the domestic minds. This lockdown; we learnt to achieve self-sufficiency and therefore how could we afford to leave such a viable domain.

Therefore; we developed a twitter competitor Koo which was recently in news due to amount of funds received. Let’s get inside to know more.

It is an Indian private microblogging & social networking service that was developed in the year 2020 by Aprameya Radhakrishan and Mayank Bidawatka. It is developed in the city Bangalore. It was initially known as Ku Koo Ku. It was systematically incepted under the government of India’s Aatmanirbhar App challenge.

It was launched in Kannada but later on it provided services in other languages. There were more than 50 lakh(5 million) users worldwide. The prominent investors are:

There were a lot of popular people, ministers & figures that took an initiative by getting themselves registered. 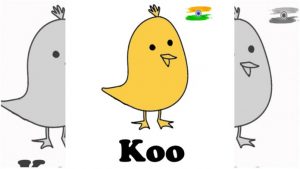 The company has bagged investment from major silicon valley investors Naval Ravikant & Balaji Srinivasan. Ravikant was an early investor in twitter while Srinivasan happens to be the former CTO at Coinbase.

The company is also expected to raise $ 100 million from Tiger Global.

“We are constantly in touch with various financial investors who are interested in partnering with our vision. We do not want to comment on any speculation,” said Koo co-founder and CEO Aprameya Radhakrishnan.

The investors who track Koo’s success are quite optimistic as people sometimes want a light platform to express opinions which lately was not provided. Twitter became quite toxic due to which a lot of negativity was created instead of fruitful & healthy discussions. So; its expected that the application would definitely get  more warm welcome in the future.

There are 4.20 billion social media users in the world which are 53% of the entire global population. 490 million new million users were added in the year 2021. Specifically; there are 448 million users which is a 21% increase from the previous year.

These figures are not just numbers; they are market segments that are lucrative for every social media platform. Koo has to make space in this market which is definitely very challenging. But the app has already targeted its major competitor Twitter.

Although Indians prefer Whatsapp as the most used social media platform; still twitter has a great footfall. Koo has also made a great debut in the Indian space. Let’s focus at upcoming events as this funding would definitely bring more options.